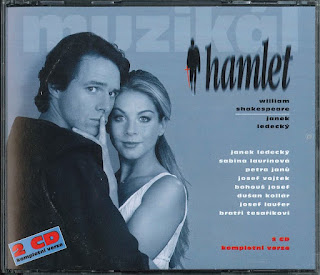 Ledecký, Janek. Hamlet: The Rock Opera. CD. BMG, 2000.
When I bought this, I was under the impression that it was a DVD, and I crossed my fingers for English subtitles. When it arrived, it was a two-CD set—the soundtrack of a Czech Rock Opera version of Hamlet. It had lyrics, but no English translation of them.

Still, the music is fascinating . . . even though the meaning is mostly a closed book (closed set of liner notes?) to me.

I say "mostly" because I prevailed upon a friend who knows Czech to translate "Kdo Má Za Uchem," one of Polonius' big numbers. First, here's the translation (along with the Czech lyrics sheet): 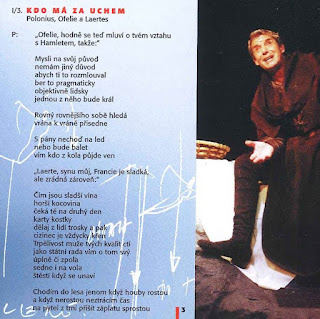 Ofelia, there is a lot of talk about that relationship of yours with Hamlet, so:

Think of your origins
I don't have another reason
to be talking you out of it
take it pragmatically
objectively, really
one day he will be a king

Birds of a feather flock together
one best find an equal to himself [Note: This doesn't translate very well—it's a saying—that somewhat has to do with the birds saying]

Laertes, my son, France is sweet
but full of betrayal at the same time

The sweeter the wines
the worse the hangover
awaits you the following day
card games and dice
make wrecks out of people
once a foreigner/stranger, always a horseradish
Patience may appreciate your qualities
like the State Council would—I know what I am talking about
all the way or halfway 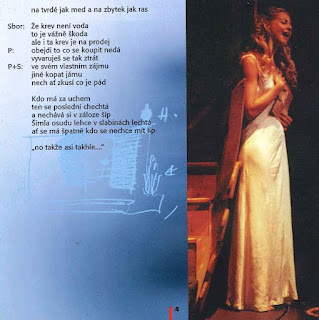 happiness will sit
even on a bull when it gets tired


I only go to the woods when the mushrooms grow
and when they don't, I don't waste time
I don't fix a bag made of thorns by sewing on a stupid patch


Choir: Blood is no water
that's really too bad
but even that blood is for sale
skip what you can't buy
you'll save yourself the loss
in your own interest
it's different to be digging a hole
let the other try what a fall is

And now, here's the song. As always with this blog, I have to provide a video clip with any audio I want to share, and I usually try to make them related in some way. In this clip, the video is from Hamlet Goes Business (for which, q.v.). In any case, the video isn't what's interesting—the music is. Listen:


Now, to add to your knowledge and experience, let me tell you about a website I found when doing a bit of research for this post. It tells something about the history of the rock opera, and it lets us know that the author is currently working on a rock opera version of Othello entitled Iago.

The site also contains some English-language versions of the songs (not, alas, the one I've provided above), including "All My Life I'm Diggin' Graves," which is what you would expect if you cast Leon Redbone as the First Gravedigger. Try that out at this URL (click on the song title to get it to play).

Clearly, we need to advocate for an English-language release of this work.

Note: Shakespeare Geek almost immediately called our attention to this English-language rock opera version of Hamlet. Watch it here, but note that it isn't the same as the one I've been writing about.

Additional Note: Shakespeare Geek almost immediately thereafter called our attention to this Korean-language musical version of Hamlet.
Links: The Website that Talks about the Rock Opera.
Copyright 2008-2039 by kj at 12:13 PM