Shakespeare's Appearance in The Lego Movie 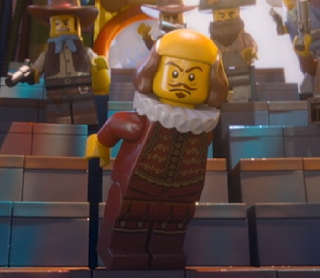 Sometimes the lapses are as long as four years.

It's been four years since I saw The Lego Movie in theaters, and I remember wanting to call our collective attention to William Shakespeare's appearance in the film. Then it took time for the DVD to be released and for the library to buy it and for me to remember just where exactly Shakespeare appeared in the film.

But we're all ready now! I've put together one clip with each of the three appearances William Shakespeare makes in The Lego Movie. The first is his only line in the film:  "Rubbish." Shakespeare himself only uses the word twice (not counting "Ay, there's the rub[bish]" from Hamlet's soliloquy. In Julius Caesar, Cassius says, "what trash is Rome, / What rubbish and what offal, when it serves / For the base matter to illuminate / So vile a thing as Caesar!" (I.iii.113-16). In Richard II, the Duchess of York asks Edmund of Langley to pick up his tale from where he left off—where "rude misgovern'd hands from windows' tops / Threw dust and rubbish on King Richard's head" (6-7).

Shakespeare's second appearance is when he flies into battle to save the day.

And, at his final appearance, he does the popular dance known as "The Worm."  Here you go—and apologies for the four-year delay.