Globe-alization: Around the World in Shakespeare Plays 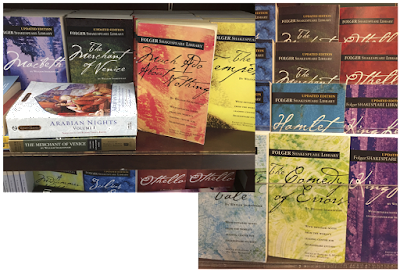 kj. "Shelfspeare One and Shelfspeare Two." Personal Photographs. January 2018.
Each of the two images to the right is a photograph I took in a bookstore.

I've been to Vietnam four times:  twice around sixteen years ago, once about two years ago, and just now. As a casual observer, I've noticed the way globalization has changed at least consumer goods available in the major cities.

Can we call it "The Oreo Factor"? Although I wasn't particularly searching for them, Oreo cookies were not readily available—I didn't see a single one. But when I traveled again, about two years later, I found a few packs of Oreos here and there--in convenience stores geared toward visitors to Vietnam. During my last two trips, I saw Oreos everywhere--even in smaller stores off the beaten path.

The same may be true of Shakespeare. Again, I wasn't looking for Shakespeare during my trips in the early 2000s, but I spotted some during my 2016 trip, and I spotted even more in 2018 (including a number of volumes in the "No Fear Shakespeare" series. And my own purpose in traveling in 2016 and 2018 was to bring more Shakespeare along with me.

I find that to be encouraging. But these volumes are in English, and I'm wondering how much Shakespeare in translation has made its way to Vietnam. Amazon lists two modern translations—Macbeth and Vua Lear—and the only review of one of them is highly disparaging.

I have learned that it's relatively common for graduate students in literature and some undergraduates to read Shakespeare in English as part of their coursework, and familiarity with the plays seems to be increasing (again, from my limited experience and exposure).

I'll be thinking and writing about this and other related matters this semester. Stay tuned. And contemplate the Oreo Factor.
Click below to purchase the books from amazon.com
(and to support Bardfilm as you do so).