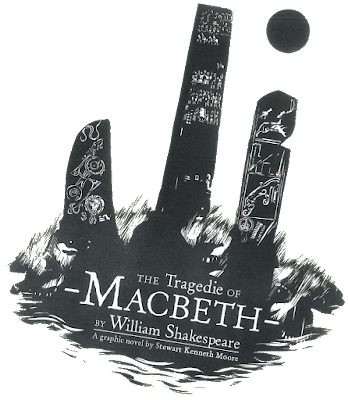 Moore, Stewart Kenneth, illus. The Tragedie of Macbeth by William Shakespeare: A Graphic Novel by Stewart Kenneth Moore based on an abridged version of "The Scottish Play" produced and performed by the Prague Shakespeare Company. N.p.: CreateSpace Independent Publishing Platform, 2016.
I decided to try this out after seeing some recommendations. It’s a graphic novel of a stage production of Macbeth—and I generally do like such layered entities.

Here’s how the author describes the project:


The idea for this project came about in 2015, when Prague Shakespeare Company’s Guy Roberts began planning to commemorate the 400th anniversary of the death of Shakespeare. Guy asked me to participate and so we knocked around some ideas over a beer. I wanted to do something different from the paintings and sketches I’d made of PSC’s productions of Hamlet and Macbeth over the years . . . but what? Drawing the whole play seemed too daunting.

At this time, Pat Mills pointed me to the work of the Irish artist Louis le Brocquy and his black-and-white Lascaux-like series based on the Celtic epic “The Tain” (The Cattle Raid of Cooley). This ancient poem features a powerful queen and her husband and a war they start with the Irish hero Cú Chulainn. I saw a challenge in trying to tell the whole story of Macbeth in equally start monochromatic hues. I thought about the mysterious symbols on Pictish stones and I saw a way.

I decided to storyboard PSC’s Macbeth just like a film; essentially a sketchbook of the stage action drawn, start to finish, in just one month. I then realized it would be even more fun to drop the state and cast the players against the half-remembered and half-imagined light of North East Scotland, my childhood home. Its beaches, its standing stones and the rubble-like causeway of Bennachie—all have a role in these pages. I used the hashtag #28DayGraphicNovel on Twitter and tweeted my progress.

The work has a good creation narrative. Beyond that, I didn't find all that much to be excited about. The graphic novel is dominated by black—which is fine, I suppose, for such a dark play, but it becomes relentless.  Side Note: The printing is not incredibly well done. The black smears copiously from the pages to the hands of even the careful reader. In addition, the first copy I received was cropped wrong—about an inch of the top of half the pages was cut off. That doesn't speak to the work itself, but this incarnation of it isn't terrific.

Here's a quick glance at the dagger speech to give you a rough idea of the work: 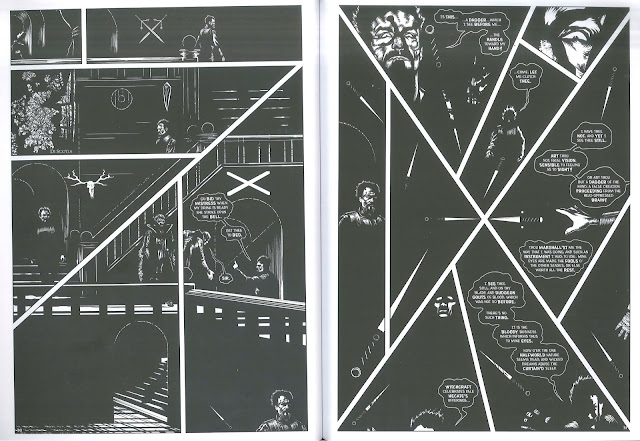 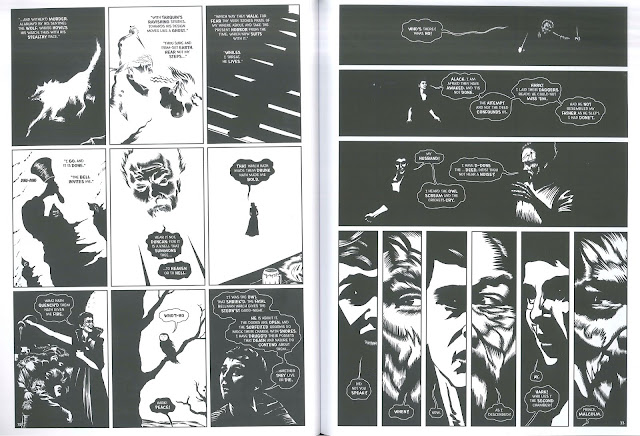 In many ways, it's just a straightforward account of one production of Macbeth. It's an interesting way to see a production, but it doesn't take us into new territory.
Click below to purchase the film from amazon.com
(and to support Bardfilm as you do so).