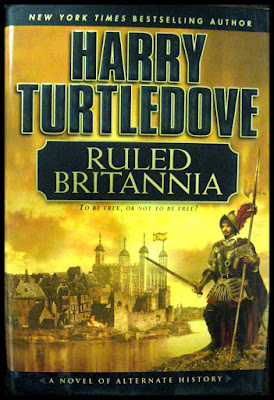 When I saw the size of the book and its cover, a gnawing, growing skepticism about it seemed to grip me. But, as Shakespeare said, "Never judge a book by its cover," so I (eventually) cracked the cover.

The first few pages absolutely sucked me in. The storyline became instantly compelling, and the characters soon followed suit.

The book imagines that the Spanish Armada succeeded in its 1588 invasion plans. England has become a Catholic nation, ruled by Philip II. After roughly a decade of this rule, an undercover group of English nationals is preparing to overthrown Spanish rule and put Queen Elizabeth I back on the throne.

And they need to recruit William Shakespeare to their cause. He's asked to write a play about Boudicca, one that will enflame English spirits to revolt against their Spanish, Catholic overlords. He's simultaneously working on a play called Philip II, which the Spanish want to use to celebrate their king upon his death (which is imminent).

Another playwright haunts the theatres of London. He admires Shakespeare, but he's working on his own craft—in Spanish. It's Félix Lope de Vega y Carpio, the great Spanish poet and playwright.

I'm very taken with the novel. The characters are fascinating—especially Shakespeare (perhaps, though not necessarily, of course), Will Kemp (who is hilariously ribald and laughs in the faces of—well, everyone), and Richard Burbage.

I don't want to give you very many spoilers—have the fun of reading this novel for yourself!—but I will give a few sample pages. 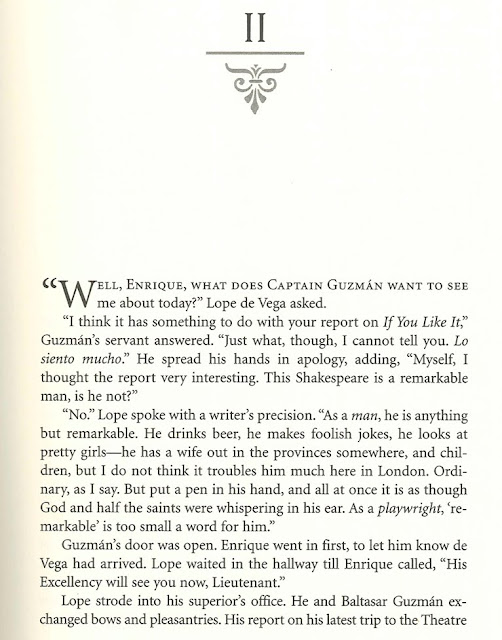 Samples of Shakespeare's work in progress (lifted, but adapted, from Titus Andronicus and other locations): 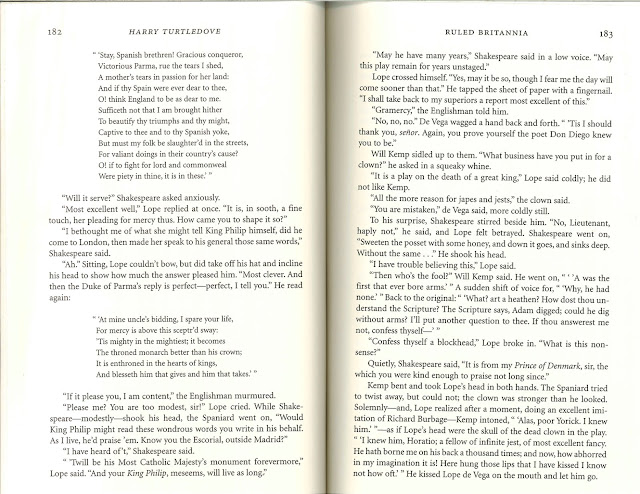 Finally, a constable named Walter Strawberry, who's humor lies in malapropism and a dogged search for the truth (ring any bells?): 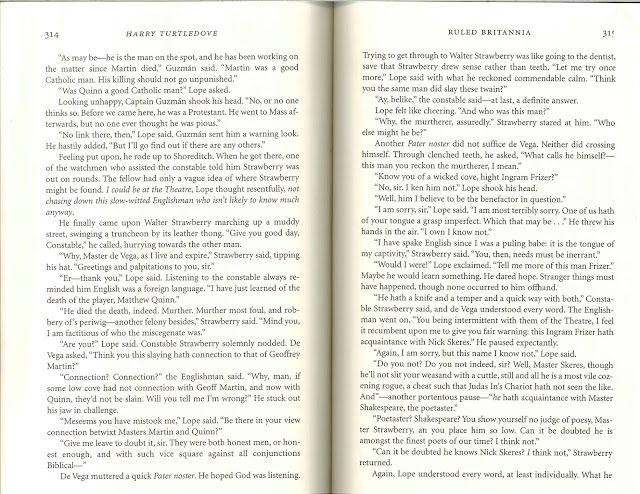 The book is very cleverly put together. The spy plot and the battle scenes are terrific, and the scenes at the Globe are quite compelling. Numerous allusions and quotations from Shakespeare abound in the common speech of the characters (in fact, that's the only quibble I have with the book—those lines become a bit too much and threaten to distract from the narrative).

Don't let the size or the cover sway you. Try this intriguing novel.