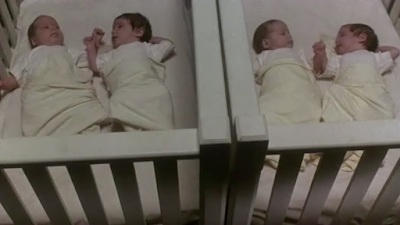 Big Business. Dir. Jim Abrahams. Perf. Bette Midler, Lily Tomlin, and Fred Ward. 1988. DVD. Buena Vista Home Entertainment / Mill Creek, 2002.
While we're on the subject of The Comedy of Errors, let me tell you about another film that I had been meaning to see for some time. Someone, somewhere told me that Big Business, the 1988 Bette Midler / Lily Tomlin film, was a derivative version of Shakespeare's Comedy of Errors. I put it down with a question mark.

After watching the film, I still have the question mark there. The film involves two sets of identical twins—that's certain. But the farce that develops is quite different than Shakespeare's. In this film, the twins are mixed up soon after birth—one of the "city folks" twins is switched with one of the "country folks" twins. That out-of-place twin always longs for her birth environment.

There's plenty of confusion and fun, but it doesn't really pick up on the themes or much of the plot of Comedy of Errors.

The clip below shows one of the film's opening scenes, explaining the double names.  It then goes on to show "the big reveal"—where all the twins learn that they have twins and that they were mixed up soon after birth.

It's a fine comedy with some Shakespearean elements, but it's not really a retelling of Comedy of Errors.
Links: The Film at IMDB.