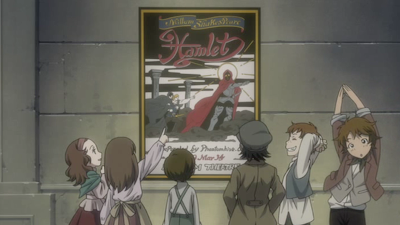 "Sono Shitsuji, Kōgyō" [a.k.a. "His Butler, Performer"; a.k.a. "His Butler, On Stage"]. By Mari Okada. Perf. Brina Palencia, Monica Rial, J. Michael Tatum, Daisuke Ono, Maaya Sakamoto, Jun Fukuyama, Yukari Tamura, and Koji Yusa. Dir. Toshiya Shinohara. Black Butler. Season 1, episode 25. Original Video Animation (OVA). DVD. Funimation Productions, 2012.
Anime is one of an enormous number of things that I can appreciate but not understand. I think that I would be able to dig in to its complexity and the rules of the genre and appreciate it even more thereby, but I think I would have to devote considerable time and effort to doing so, and time is not one of the things I have freely at my disposal. 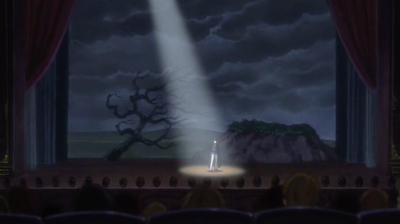 Even with my limited appreciation and even more limited understanding, I can tell that Black Butler is on the high end for anime. I've only watched one episode, but considerable complexity and character development is readily apparent in just that one. And, unlike the Shakespeare in Aa! Megamisama! (for which, q.v.), the Shakespeare in this episode seems to be carefully and intentionally crafted.

In the episode "His Butler, Performer," actors who were to put on a charity performance of Hamlet for a group of orphans are delayed, but, as we've been instructed, the show must go on! Drawing from their limited resources, the show's regulars put on the show. I've complied (and streamlined) the performance of Hamlet in the clip below.

The butler's musing "I don't know that children can quite understand Hamlet" is proven false (even though it did take dancing seaweed to get there.

At the end of that clip, it appears that the show (in both senses) is over. But there's something of an epilogue after the closing credits showing how everyone reflects on their Hamlet:


That gives us a good sense of the larger issues that are at stake in the show as a whole. It convinces me that an investment of time in Black Butler would be well worthwhile. Somehow, I'll just need to track down the time required! 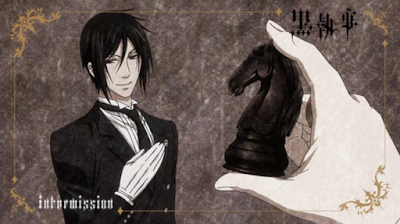 Links: The Wikipedia Article on the Series.