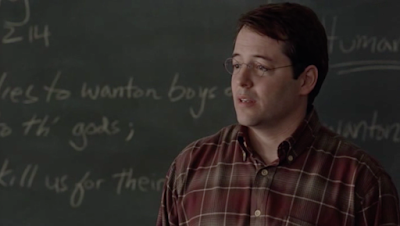 Margaret. Dir. Kenneth Lonergan. Perf. Anna Paquin, Matt Damon, Matthew Broderick, and Mark Ruffalo. 2011. DVD. Fox Searchlight, 2012.
Margaret is a film about a high school girl named Lisa who distracts a bus driver, contributing to an accident in which a women is killed. It uses King Lear and a possible reference to Macbeth to give greater roundness to some of its themes.

The film itself has some major flaws, but I greatly enjoyed seeing Matthew Broderick playing the English teacher—Ferris Bueller's on the other side of the attendance chart now, eh?

In the first clip below, I've put a brief scene introducing the idea of King Lear to the film, another short clip that I take to be related to Macbeth (be forewarned—it involves blood), and a poem by Gerard Manly Hopkins from which the film gets its name:


In case you need the text of Hopkins' poem with its marked sprung rhythm, here it is:

to a young child

Márgarét, áre you gríeving
Over Goldengrove unleaving?
Leáves like the things of man, you
With your fresh thoughts care for, can you?
Ah! ás the heart grows older
It will come to such sights colder
By and by, nor spare a sigh
Though worlds of wanwood leafmeal lie;
And yet you wíll weep and know why.
Now no matter, child, the name:
Sórrow’s spríngs áre the same.
Nor mouth had, no nor mind, expressed
What heart heard of, ghost guessed:
It ís the blight man was born for,
It is Margaret you mourn for.

Later in the film, we are invited to consider possibly the darkest lines in King Lear: the speech Gloucester makes after he has been blinded and cast out of his own house. In the depths of his despair, he cries out, "As flies to wanton boys are we to the gods: / They kill us for their sport." Here's how the teacher elicits responses from his students. (Note: the clip begins with the same brief Lear scene from above—I wanted them conveniently in one file).

The student makes a very valid point that Matthew Broderick is right to support. Broderick says, "That's a valid point. Just because Shakespeare has one of his characters say something, doesn't me he personally agrees with it." The other student also has a idea worth exploring—though I'm not sure it's articulated as clearly as it could be—but there the teacher becomes flummoxed because the point is distracting from the direction he wants the discussion to go.

At such points, I, too, often simply say, "Poor Tom's a-cold" and move on.
Links: The Film at IMDb.