Heights Gives us a Glimpse at Glenn Close's Lady Macbeth 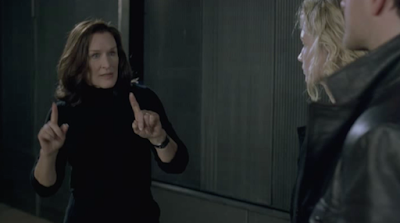 Heights. Dir. Chris Terrio. Perf. Elizabeth Banks, Glenn Close, James Marsden, and Rufus Wainwright.
Heights is a complicated, engrossing, disturbing film about the deterioration of relationships—and the problematic role past relationships can play in those relationships.

Glenn Close (who has her own Shakespeare street cred) plays an actress / teacher (IMDb suggests at Juilliard) / diva named Diana whose husband is having an affair and whose daughter is about to be married to a man who, from the opening few scenes, we think is not to be trusted.

The very opening of the film shows us her character as she critiques the performance two students are giving of "What beast was't then / That made you break this enterprise to me?" Although we're meant to dislike this character from the start, she does make a good point about letting the language work for you:

We are also privy to a bit of how Diana / Glenn Close would play Lady Macbeth (though it's interrupted with divaesque tangents):

Diana also peppers her everyday conversation with a few Shakespeare quotes here and there:


For those of you keeping score, the play in question is actually 1 Henry VI (though the film suggests that there's just one Henry VI, and no one ever reads it). At least she gives us the memorable quote "Shakespeare's worst is still better than anyone else's best."

As a bonus for those who have read this far, there's a nifty Rime of the Ancient Mariner reference in the background conversation at a party:

To tell you more would be to provide spoilers, but I will mention that the image of Diana as Lady Macbeth pops up at multiple significant places in the film—usually as a bit of an advertisement for the play.
Links: The Film at IMDB.