Book Note: The Merchant of Vengeance 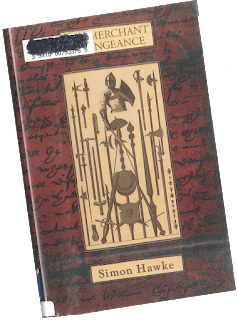 Hawke, Simon. The Merchant of Vengeance. New York: Tom Doherty Associates, 2003.
The fourth in the series of "Shakespeare and Smythe Mystery Series" (I somehow missed Much Ado About Murder, the third book, but I shall attempt to rectify that shortly), The Merchant of Vengeance, is very strong on characterization and language use but not quite as compelling in the details of the murder mystery.

Still, it's a good, fun read. As with A Mystery of Errors and The Slaying of the Shrew, I'm loathe to provide spoilers, but this one contains a lot of interaction with Shakespeare's contemporaries. We meet the largely-destestable Robert Greene in a pub, and Shakespeare thinks about ways to outdo Marlowe's Jew of Malta, finding a way to present a Jew on stage with the fullness of his humanity.

And there's a murder and betrayal and a league of thieves and exciting, insulting exchanges and romance (a bit). I recommend The Merchant of Vengeance as a light end-of-summer read that still has some gravitas.