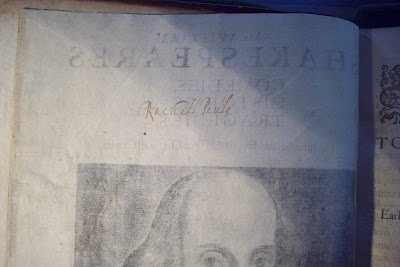 I was drawn to this copy because of a name that is written on the verso of the frontispiece: Rachell Paule. The possibility of an early female reader of Shakespeare making markings in a copy of the First Folio—possibly revealing something of what one woman thought about Shakespeare—was too intriguing not to investigate. Alas, there were very few marks of any sort whatsoever in the volume.

But, of course, it was thrilling merely to be able to hold a First Folio, to glance through it, to search for the traces history had left on it, to contemplate its provenance—and to read portions of it!

To give you, dear readers, a sense of what that was like, I've put together this video of part of my encounter with Folger Shakespeare Library First Folio Number 72:

Exciting to be there for the dramatic opening! The National Gallery has three etchings of Rachel Paule (née Clitherow) 1617-1691. Could this be she?

That may very well be. The Clitherows were a well-known, very wealthy family. If this is the Rachell Paule whose signature is on the book, her father was Sir Christopher Clitherow, who was a member of the East India Company and, in 1635, Lord Mayor of London.

I wish I had time to investigate the possibilities. Did the Clitherow family become connected to the Barons Forester (the fourth of whom is the earliest owner of this folio that can be traced)? Scholars with more time and greater knowledge may wish to pursue this line of thought!

I do wish Mrs. Paule had been a bit more copious in her marginalia—though her lack of notes does make Folger 72 a nice, clean text to study.

Thanks for the link to the etchings!

Perhaps this is another line of approach. The man the lovely Rachell married at age 19 was William Paule, an Anglican cleric who was made chaplain to Charles I in the early 1630s and was bishop of Oxford from 1663 until his death in 1665. He had been married twice before, in 1632 and 1635. After being widowed a second time, he married Rachell Clitherow, almost certainly in 1636. That's as far as I can go using the online DNB. Maybe someone with First Folio expertise can trace 72 back to one of these two families.

Perhaps it's time for one or the other of us to write to Eric Rasmussen to see what his thoughts are. At this point, the folio's movement between the Clitherows and the Barons Foster is likely to be speculative at best--but nonetheless interesting!