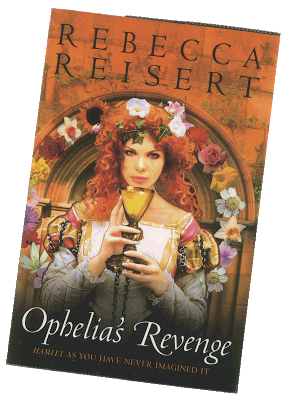 Reisert, Rebecca. Ophelia's Revenge. London: Flame, 2003.
Impressed with Rebecca Reisert's Third Witch (for which, q.v.), I decided to try Ophelia's Revenge, her second novel. I found it a compelling book but not as thrilling as her debut.

Providing a plot summary—or even the beginning of a plot summary—would involve far too many spoilers, and most of the fun of this novel is seeing how Reisert manages to keep the plot of Shakespeare's Hamlet intact while, like Tom Stoppard in Rosencrantz and Guildenstern are Dead, telling the behind-the-scenes story of another character in the play.

I can tell you that Reisert expands the characters exponentially, giving Polonius multiple marriages, Hamlet an older brother, and Ophelia another brother (after a fashion). She also gives Ophelia the ability to see ghosts—including (and here's a minor spoiler) the ghost of Yorick. It takes her some time to realize that he's a ghost, but he becomes one of her closest confidents.

The book as a whole doesn't work as well as The Third Witch, but it's still quite interesting, filled with unexpected twists and turns and its own fascinating answers to many of the questions Shakespeare's play raises.