Book Note: The Fault in our Stars 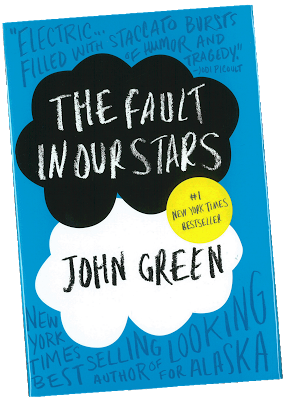 The plot centers on two teenagers in various stages of battling with cancer. Our protagonist, Hazel, dearly loves a book called An Imperial Affliction (the title is taken from Emily Dickinson's poem 258—"There's a certain Slant of light, / Winter Afternoons— / That oppresses, like the Heft / Of Cathedral Tunes—") by an author named Peter Van Houten (both the book and its author are fictional). The book is about a girl dying of cancer, and it artistically ends in mid-sentence, demonstrating the reality of death. Hazel admires the literary decision, but she's frustrated at not knowing what happens to the other characters in the book after that point. She's even written letters to the author, who lives as a recluse in the Netherlands, but the letters have not been answered.

But Augustus, the boy our protagonist becomes interested in, contacts Van Houten's assistant via e-mail, and he starts to get some answers. One of them (on pages 111-12) contains some of the novel's most direct Shakespearean connections:

I am in receipt of your electronic mail dated the 14th of April and duly impressed by the Shakespearean complexity of your tragedy. Everyone in this tale has a rock-solid hamartia: hers, that she is so sick; yours, that you are so well. Were she better or you sicker, then the stars would not be so terribly crossed, but it is the nature of stars to cross, and never was Shakespeare more wrong than when he had Cassius note, "The fault, dear Brutus, is not in our stars / But in ourselves." Easy enough to say when you're a Roman nobleman (or Shakespeare!), but there is no shortage of fault to be found amid our stars.

While we're on the topic of old Will's insufficiencies, your writing about young Hazel reminds me of the Bard's Fifty-fifth sonnet, which of course begins, "Not marble, nor the gilded monuments / Of princes, shall outlive this powerful rhyme; / But you shall shine more bright in these contents / Than unswept stone, besmear'd with sluttish time." (Off topic, but: What a slut time is. She screws everybody.) It's a fine poem but a deceitful one: We do indeed remember Shakespeare's powerful rhyme, but what do we remember about the person it commemorates? Nothing. We're pretty sure he was male; everything else is guesswork. Shakespeare told us precious little of the man whom he entombed in his linguistic sarcophagus. (Witness also that when we talk about literature, we do so in the present tense. When we speak of the dead, we are not so kind.) You do not immortalize the lost by writing about them. Language buries, but does not resurrect. (Full disclosure: I am not the first to make this observation. cf, the Macleish poem "Not Marble, Nor the Gilded Monuments," which contains the heroic line "I shall say you will die and none will remember you.")

I digress, but here's the rub: The dead are visible only in the terrible lidless eye of memory. The living, thank heaven, retain the ability to surprise and to disappoint. Your Hazel is alive, Waters, and you mustn't impose your will upon another's decision, particularly a decision arrived at thoughtfully. She wishes to spare you pain, and you should let her. You may not find young Hazel's logic persuasive, but I have trod through this vale of tears longer than you, and from where I'm sitting, she’s not the lunatic.

In order to get some answers, the two of them travel to Amsterdam to meet with the author. While there, they visit the Anne Frank House; before they exit, they see Anne Frank’s notebook of favorite quotations, which is open to another Shakespeare quote:


. . . and right before we got to the café . . . we saw pages of Anne’s diary, and also her unpublished book of quotations. The quote book happened to be turned to a page of Shakespeare quotations. For who so firm that cannot be seduced? she’d written. (204)

The quote is from Julius Caesar, Act I, scene ii, line 312. Cassius is talking again—after having seduced Brutus into believing that "the fault is not in our stars."

Allow me a side note: I've done a bit of preliminary research, and the manuscript—her "Favourite Quotes Notebook," according to the official site of the Anne Frank House—does exits: it is not fictional. I'm intrigued by this, and I'm currently trying to track down a copy of the manuscript—I'll let you know if I discover anything.

The novel itself is powerful, moving, extraordinary, insane, amazing, awe-inspiring. It leaves me speechless.

Note: This book is classified as Young Adult, but I would not recommended it for adults on the younger side of the Young Adult spectrum. In many ways, the book is for adults rather than even all but the Oldest of the Elderly Young Adult audience.