Sonnet-by-Sonnet Responses to the Sonnets (in Sonnet form) 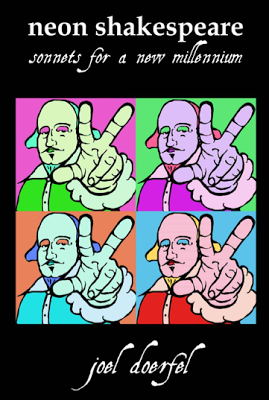 Doerfel, Joel. Neon Shakespeare: Sonnets for a New Millennium.. N.p.: Long Yes Press, 2013.
Some time ago, the author of these sonnets sent me a preview copy, asking if I would be interested in reading and reviewing the work. Initially, I was, as you would be, worried that each sonnet would be nothing more—or not much more—than a modernized version of the corresponding Shakespeare sonnet.

I was pleasantly surprised—and even (I'll admit it) occasionally shocked—when I read the work.

In this book, Doerfel doesn't try to translate Shakespeare's sonnets into a modern vernacular. Nor does he produce something cheesy like an answering sonnet from the one addressed (the Dark Lady, the Rival Poet, et cetera). Instead, the complexity of the work lies in an exchange between each sonnet and its pair.

Doerfel comments on his method:


Since each of my sonnets is a conceptual response to its Shakespearean counterpart, readers are encouraged to read Shakespeare’s sonnet first, followed by my response. My responses range from parody to commentary to elaboration to dumbfounded silence. Half the fun is unraveling the logic of this call-response.

And it is fun. I found these thoughtful, playful, and clever. And—I should mention it—I occasionally found them to use coarse language.

Some glory in their birth, some in their skill,
Some in their wealth, some in their bodies' force,
Some in their garments, though new-fangled ill,
Some in their hawks and hounds, some in their horse;
And every humour hath his adjunct pleasure,
Wherein it finds a joy above the rest:
But these particulars are not my measure;
All these I better in one general best.
Thy love is better than high birth to me,
Richer than wealth, prouder than garments' cost,
Of more delight than hawks or horses be;
And having thee, of all men's pride I boast:
Wretched in this alone, that thou mayst take
All this away and me most wretched make.


91.
she drinks her wine. he drinks his gatorade.
she hasn’t had her cup of coffee yet.
he just quit smoking & she just got laid.
she’s on the rag. he’s started working out.
such liturgies pervade their daily lives.
their holiest communions are mundane.
eating & drinking, sex & exercise—
these habit-casuistries decide their days.
he hones his body, but she disregards hers,
busy with her soul & church & kids.
he makes his life into a work of art.
she follows jesus. he’s an agnostic . . .
. . . he lives embodied & refines his tastes.
she pines for her eternal resting-place.

What's in the brain that ink may character
Which hath not figured to thee my true spirit?
What's new to speak, what new to register,
That may express my love or thy dear merit?
Nothing, sweet boy; but yet, like prayers divine,
I must, each day say o'er the very same,
Counting no old thing old, thou mine, I thine,
Even as when first I hallow'd thy fair name.
So that eternal love in love's fresh case
Weighs not the dust and injury of age,
Nor gives to necessary wrinkles place,
But makes antiquity for aye his page,
Finding the first conceit of love there bred
Where time and outward form would show it dead.

When my love swears that she is made of truth
I do believe her, though I know she lies,
That she might think me some untutor'd youth,
Unlearned in the world's false subtleties.
Thus vainly thinking that she thinks me young,
Although she knows my days are past the best,
Simply I credit her false speaking tongue:
On both sides thus is simple truth suppress'd.
But wherefore says she not she is unjust?
And wherefore say not I that I am old?
O, love's best habit is in seeming trust,
And age in love loves not to have years told:
Therefore I lie with her and she with me,
And in our faults by lies we flatter'd be.


138.
i will not thank you for your flattery,
or genuflect to merit your embrace,
transform myself to your commodity,
or think myself in your objective case.
you’re worse than narcissus. you’re self-absorbed,
but need to feel yourself objectified...
so doting eyes & minds become your mirrors.
you wear their stares. their smiles are where you hide.
their language is the fun-house of your being,
the circus where you host your self-esteem,
retreat into the safety of a thing—
a coin, an accolade, a ghost, a dream.
your prowess and your praise fail to impress.
go elsewhere with your frail false-consciousness.