When Mr. Shakespeare Comes to Town 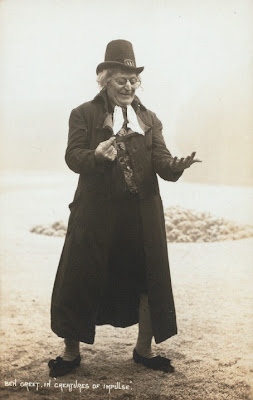 Greet, Ben. "Benedick's Idea of a Wife." [Much Ado About Nothing, II.iii.7-35.] Victor 17115. Matrix/Take: B-11989 / 1. 3 May 1912. Some kind soul recently told me about The National Jukebox at the Library of Congress. The collection is fabulous and fascinating, and the first thing I did was search for "Shakespeare" in it. The results were surprising.

There were a number of recordings of "Greatest Speeches from Shakespeare," including a performance by Ben Greet, the great Shakespearean actor / producer / director who advocated a return to simpler productions of Shakespeare. Here's a recording of Ben Greet giving Benedick's speech about his ideal wife in Much Ado About Nothing:


But the National Jukebox contains more than speeches from Shakespeare. If you'd like to hear the great hit "Sigh No More, Ladies" as it was performed in 1914, look (or listen) no further:


Finally, there's always room for a novelty song. Here's "When Mr. Shakespeare Comes to Town," a song about a man who asks a woman to a minstrel show. Perhaps because she recognizes the inherent racism in such performances (a racism that is sadly reflected in the sheet music for the song if not in its lyrics), she rejects his offer, telling him that she'll reconsider going out with him when Mr. Shakespeare comes to town.

I like that play they call Macbeth.
My brother Seth
Got scared to death.
It almost took away his breath,
And he fainted right on the floor.
And when that Shakespeare man comes 'round
You have got to chain me right to the ground.
Right up in front I'm always found;
He's the man I do adore.
I like a play that's good—
Very fond of N. S. Wood—
So Mr. Johnson, save your dough
For a Shakespeare show,
And then I'll go . . .