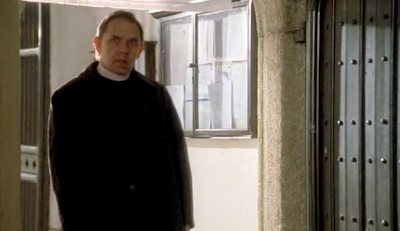 "Happily Ever After" [a.k.a. "In Sickness and in Health"]. By Jack Lothian and Dominic Minghella. Perf. Martin Clunes, Caroline Catz, and David Ryall. Dir. Ben Bolt. Doc Martin. Season 3, episode 7. ITV. 5 November 2007. DVD. Acorn Media, 2011.
Shakespeare is, in one sense at least, like dessert: there's always room for a little Shakespeare.

Although it took until almost the last moment in Season Three, the British Comedy Drama Doc Martin finally squeezed in a little.

There may be more later on, but I haven't yet watched much further than that point—for example, Season four, episode two bears the title "Uneasy Lies the Head," a quote from 2 Henry IV (if you're keeping track, it's III.i.31), and I hold out great hope for additional Shakespeare.

But one line (a quote from Henry V—III.i.1, if you're keeping track) is all we get in this one. A reluctant priest has been convinced to return to the church for one last service. Here's what he says upon entry: