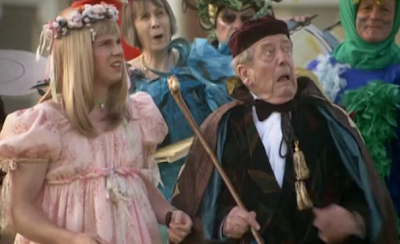 "Episode 6." By Alan Whiting. Perf. Stephen Fry, Karl Davies, Celia Imrie, Tony Slattery, and Phyllida Law. Dir. Edward Hall. Kingdom. Season 2, episode 6. ITV. 17 February 2008. DVD. BFS Entertainment, 2009.
Another British Comic Drama has even more Shakespeare embedded in it. In addition to a few passing references throughout the series, the last episode of season two of Kingdom (staring Stephen Fry) has a considerable number of connections to The Tempest. The residents of the nursing home at which Peter Kingdom's aunt resides (and which she may, in fact, run—that's not quite clear to me) are putting on a production of The Tempest, but the sprinkler system keeps going off whenever Prospero delivers his speeches.

You can watch the whole episode on Hulu, or you can view an embedded clip (provided the embedding works properly) of the opening performance below:

Click below to purchase season two of the show from amazon.com
(and to support Bardfilm as you do so).