Prince of the Himalayas Comes to Bellevue 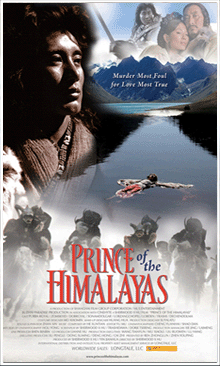 Prince of the Himalayas [Ban dao yin xiang; a.k.a. Ximalaya wangzi]. Dir. Sherwood Hu. Perf. Purba Rgyal, Dobrgyal, Zomskyid, Sonamdolgar, Lobden, and Lopsang. Hus Entertainment, Shanghai Film Studios. 20 October 2006. Thanks to a generous grant from Northwestern College, I will be able to attend the Shakespeare Association of America's Annual Convention this year (in Bellevue, Washington). The prospect is absolutely thrilling. Not only will the Taiwan Bangzi Company present a play adapted from The Merchant of Venice, but the conference will also screen a film entitled Ban dao yin xiang (Prince of the Himalayas), a derivative of Hamlet set in Tibet. Scholars in other parts of the world have been able to view and to write about that film, but it is virtually impossible to find a way to see it in the United States (two universities in Australia own non-circulating copies, but I have not been able to find it elsewhere). And (as if that weren’t enough), a concert of songs related to Ophelia will be performed during the convention. These songs will cover both global and historical perspectives on Ophelia and on the texts she sings in Hamlet.

Wait! There's more! The speakers at the conference include some of the most important Shakespeare scholars of the day: Stephen Orgel, Paul Yachnin, Russ McDonald, Karen Newman, David Bevington, and others are scheduled to speak this year.

Look for posts from Bardfilm about the Asian adaptations and derivatives presented at the conference. The Prince of the Himalayas (a.k.a. The Fresh Prince of Bellevue) promises to be exceptionally interesting for the study of global Shakespeares.Links: The Film at IMDB.
Copyright 2008-2039 by kj at 6:58 AM

That is fantastic! Just down your alley on cultural differences in performing Shakespeare.

What a sabbatical you are having!

Who is performing the Ophelia concert? I'd be curious to see a list of the songs after the conference.

Thanks for the comments, all!

Linnea, this is what the program says:

"Ophelia, From Song to Stage

I'll try to provide a list of the songs afterwards.

And a great film it was: just saw it.

The film gives us a lot to think about. A full post on the subject will come soon!