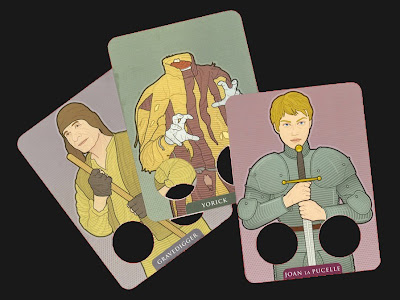 Rogalski, Michael. Masterpuppet Theater: The World of Shakespeare—At Your Fingertips! Philadelphia: Quirk Books, 2010.
As long as we're doing silly things not normally done at Bardfilm, I should review a set of Finger Puppets that the creator was kind enough to send along to be reviewed.

I'm impressed by the choices on the cards. I don't want to give away all the surprises, but I'd like to point out that they're quite clever. I'm particularly fond of Yorick (pictured above). A skull with feet just wouldn't look quite right, so we're given the headless corpse of Yorick instead. I also appreciate Joan la Pucelle making an appearance. You have to be thorough to include any character from 1 Henry VI!

A lot of fun can be had with the cards, whether you're a professor of Shakespeare or a parent or a Shakespeare aficionado. Observe these two short scenes: Richard III's speech from V.iv.6 and Antigonous' last lines from A Winter's Tale (III.iii.53-58):


I'm greatly impressed that the makers included a bear card so that one of Shakespeare's most famous stage directions can be carried out adequately: "Exit, pursued by a bear" (III.iii.58.s.d.).

I did have some trouble using the cards as they're intended. My fingers just won't work properly as legs. But holding the cards and moving them around can be just as effective.

Thanks, Michael Rogalski, for creating this delightful set!


Click below to purchase the set from amazon.com
(and to support Bardfilm as you do so).