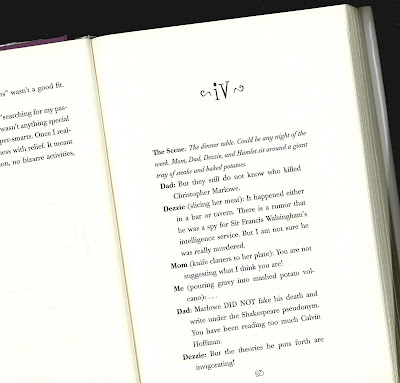 Seventh-grade Hamlet, our narrator, has a seven-year-old sister named Desdemona (who goes by "Dezzie"). Dezzie is a certifiable genius, and she is enrolled in Hamlet's middle school. That's part of the problem. Their parents are Shakespeare professors—the kind who dress in Shakespearean garb, make models of the Globe theatre for fun, quote Shakespeare left and right, and set up a booth at the local Renaissance Fair. That's another problem.

[Editor's Note: This image is not the title page of the book, but it's the image that comes to me when I think of the title. This girl's life has been inscribed over the text of a Shakespeare play.]

The prose doesn't rise to the heights of Susan Cooper's Shakespeare-related young adult novel (for which, q.v.), but I'm not sure it's meant to. And the novel's voice is a fun, light, humorous one. Occasionally, as in the image that heads this post, our narrator launches into brief dramatic sketches that demonstrate the humor of the situation and underscore the play-beneath-the novel aspect of the book:


The Scene: The dinner table. Could be any night of the week. Mom, Dad, Dezzie, and Hamlet sit around a giant tray of seaks and baked potatoes.


Dad: But they still do not know who killed Christopher Marlowe.

Dezzie (slicing her meat): It happened either in a bar or tavern. There is a rumor that he was a spy for Sir Francis Walsingham's intelligence service. But I am not sure he was really murdered.

Mom (knife clatters to her plate): You are not suggesting what I think you are!

Dad: Marlowe did not fake his death and write under the Shakespeare pseudonym. You have been reading too much Calvin Hoffman.

Dezzie: But the theories he puts forth are invigorating!

The different characters and their attitudes are nicely drawn in that short scene.

All in all, it's a good book with some depth behind the light humor. It's well worth reading.

[Editor's Note: The Shakespeare scholar in me won't let me avoid mentioning the one lapse in Shakespearean knowledge in the book. At one point, Hamlet's parents come to her school to help her English teacher with a Shakespeare unit. They want to teach the students iambic pentameter, and they leap about the classroom, banging on a tambourine. It's a brilliant scene, beautifully visualized. However, the line they choose as an example is not in iambic pentameter. Instead, it's one of the trochaic passages from A Midsummer Night's Dream: "Weaving spiders, come not here; / Hence, you long-legg'd spinners, hence" (II.ii.20-21). Instead of banging the tambourine in a trochaic beat ("WEAV-ing SPI-ders COME not HERE"), they attempt to make iambs out of it: "Wea-VING [clang!] spi-DERS [clang!] come NOT [clang!]" (226). It's arguably a minor point, but the characters—and the words—suffer from it.]
Links: The Author's Official Web Site.

I think I thumbed through this at my children's bookfair earlier this year, but put it back because my oldest is only in 3rd grade and you don't always know what's age appropriate anymore.

That iambic/trochaic confusion sounds downright *painful*, as if the author had no clue what iambic really means. You can't just take " dah DUM da DUM dah DUM", pick your favorite line, and read it like that!

In season 1 of The Muppets, they used to do this "issue of the day" talk show skit where Kermit would pose a question and the guests would argue, although inevitably it would turn into bad puns. My middle daughter loves this sketch, and will often torture me by asking Kermit's question. "Daddy," she'll ask out of the blue, "Was Shakespeare bacon?"

I scream, she laughs. Good times.

I hesitated to mention it because the book is much better than that small lapse makes it seem to be. Still, the author did put that section in the novel, and she should be held accountable for it! I wonder where the publisher's fact checkers were. And I wonder where the proofreaders were, too--there are some typographical errors in the book as well.

In any case, it's a good read. There are some things that may be boring to younger readers--crushes on boys, for example--but I don't think there's anything inappropriate. I don't remember any terribly strong language, for example.

And don't let the quote I used make you think that the authorship question is a major part of this book. Elise Broach's Shakespeare's Secret makes that the center of her novel, unfortunately taking the indefensible Oxfordian position throughout. That makes the "Shakespeare scholar" parent in that novel much less believable!

Bardfilm has a post on that novel at this URL:

Enjoy, and thanks for the Bacon-related anecdote!

Thank you! I just finished this book, and the so-called iambic pentameter exercise made me a little crazy. How can you "feel the words in your marrow" (p. 226) when you stress all the wrong syllables?

(See the effect of 10 years of GRSF exposure?)

This mix-up bothered me so much that I've been searching reviews for any mention of it, and yours is the only one I've found.

Glad to be of service! I suppose it may be a question of "I'm so familiar with this that I can't understand how it is so often misunderstood." But, again, accountability is important here. When I write about the Higgs boson particle, I do try to comprehend what I need to comprehend about it. I may not have great depth, but I do understand that there's depth there.

Thanks for the comment! See you at the next GRSF!