Maggie Smith as Beatrice in 1967 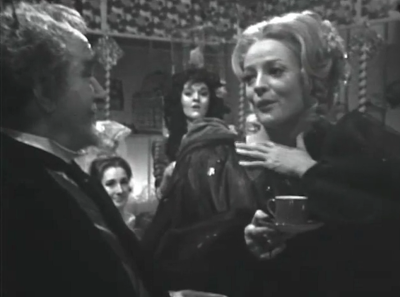 A few days ago, the Library of Congress posted two brief clips from those no-longer-lost broadcasts. One of them is of Maggie Smith as Beatrice:


Here's the script they're following (Shakespeare's text is slightly edited):

LEONATO
By my troth, niece, thou wilt never get thee a husband, if thou be so shrewd of thy tongue.

BEATRICE
For the which blessing I am at him upon my knees every morning and evening. Lord, I could not endure a husband with a beard on his face: I had rather lie in the woollen.

LEONATO
You may light on a husband that hath no beard.

BEATRICE
What should I do with him? Dress him in my apparel and make him my waiting-gentlewoman? He that hath a beard is more than a youth; he that hath no beard is less than a man: he that is more than a youth, I am not for him; he that is less than a man, he is not for me. Therefore, I will hire myself out for sixpence a day, as the virgin in the proverb, and lead apes into hell.

LEONATO
Well, then, go you into hell?

We all devoutly hope for a full DVD release of the film from which this rare glimpse into BBC Shakespeare in the 1950s and 1960s comes.
Links: The Film at IMDB. The Blog Post by the Library of Congress. The Complete List of the Films Discoverd.
Copyright 2008-2039 by kj at 11:59 AM

Great find! It's so inspiring to gain perspective on the careers of actors that I would only know otherwise from their later years. Thanks for posting this.

Thanks, Christopher! I'll pass those thanks on to the Library of Congress for making this brief clip available. may the whole thing follow shortly!

This is absolutely wonderful! I agree, I've only seen Maggie Smith in her later films (Downton, Harry Potter etc) and it's lovely to see her in the theatre as opposed to on screen. I am studying "Much Ado" in English at school and it's incredibly helpful to watch how Beatrice is portrayed in the theatre, as the modern films can often interpret the characters slightly differently . I would LOVE to see the whole film!