Is this the Promised End of Shakespeare and Star Trek Complete? 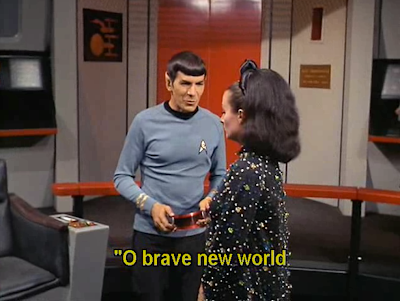 I'm not quite sure how I missed it, but I took one more look at the Memory Alpha Shakespeare Page, noting as I did so that my own ideas about an Anthony and Cleopatra connection in "Elaan of Troyius" had been incorporated into that page, and I found a Shakespeare quote that I had missed completely.

I've written on “Is there in Truth no Beauty?” before (for which, q.v.), but I neglected to note a direct quote from The Tempest.

After giving us a bit of Byron (included here as a bonus for those who like a little English Romanticism as a side to their Bardolotry), Spock (who is sort of combined with an alien creature named Kollos at this point—again, I'll spare you the details) quotes The Tempest, pointedly calling up the most famous speech by the Miranda of The Tempest and delivering it to the Miranda in the Star Trek episode who is the other Miranda's namesake:


The speech, spoken by Miranda in Shakespeare's play, is delivered, instead, to Miranda in the Star Trek episode. She replies with the comment Prospero makes in the play.

I still have an inkling that there's more of Othello than The Tempest about this episode, centered as it is on the theme of jealousy. But I can't deny the quotation.
I also can't deny that Kollos later says, through Spock, "This thing you call language, though—most remarkable. You depend on it for so very much. But is any one of you really its master?" Is this the equivalent to Caliban's "You gave me language, and my profit on't / Is . . . I know how to curse" (I.ii.363-64)?
And a bit later still, Captain Kirk says this to Miranda: "With my words, I'll make you hear such ugliness as Spock saw when he looked at Kollos with his naked eyes. The ugliness is within you!" Is that Hamlet's speech to Gertrude? Hamlet, after all, says, "Come, come, and sit you down; you shall not budge; / You go not till I set you up a glass / Where you may see the inmost part of you" (III.iv.18-20). Similarities may be found here.

Humbled, I note that these are the last Shakespeare allusions I've been able to find in the Star Trek universe. There may be others, and I'm open to having them pointed out to me!Links: Shakespeare and Star Trek Complete.
Copyright 2008-2039 by kj at 5:00 AM