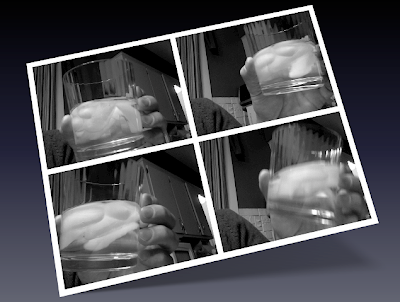 Pastan, Linda. “A Glass of Cold Water.” The Last Uncle. New York: W. W. Norton, 2002. 7.Jones, Keith. "       Poeti / cs, or An Ans / wer to ‘What is Poetr / y?’”
Although these poems are not, strictly speaking, Shakespeare related, they relate to the general study of literature. In Literary Theory, we began discussing and attempting to define these terms: poem, text, author, reader, and reality. And Shakespeare did write something of a definition of a poet:

The poet's eye, in fine frenzy rolling,
Doth glance from heaven to earth, from earth to heaven;
And as imagination bodies forth
The forms of things unknown, the poet's pen
Turns them to shapes and gives to airy nothing
A local habitation and a name. (A Midsummer Night's Dream, V.i)

So I though it would be reasonable to provide you all with two poems about poetry.  The first is by Linda Pastan, and it works by saying what it isn't at the same time that it says what it is:

"A Glass of Cold Water"

Poetry is not a code
to be broken
but a way of seeing
with the eyes shut,
of short-
circuiting the usual
connections until
lioness and
knee become
the same thing.

Though not a cure
it can console,
the way cool sheets
console
the dying flesh,
the way a glass of cold
water can be
a way station
on the unswerving
road to thirst.

That's a marvelous poem.  For my literary theory class, I wrote a poem about poetry of my own—my own glass of water as it were!  Ha, ha, ha!  Today I'll ask them whether it counts as a poem or not.  On Friday, we'll get to whether it's a good poem.

A bird of which the ancients fabled that it bred about the time of the winter solstice in a nest floating on the sea, and that it charmed the wind and waves so that the sea was specially calm during the period.

A small vessel propelled by oars or lateen sails, or both, used, chiefly in the Mediterranean, for coasting voyages.

A unit of electromagnetic flux density used in radio astronomy, equal to 10-26 watts per square metre per hertz.

A rhythmically occurring event, esp. in the environment, which acts as a cue in the regulation of certain biological rhythms in an organism.