Dogberry and the Keystone Cops? 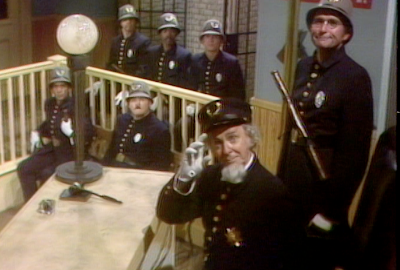 Much Ado about Nothing. Dir. A. J. Antoon and Nick Havinga. Perf. Sam Waterson, Kathleen Widdoes, Barnard Hughes, and Douglas Watson. 1973. DVD. Kultur, 2002.
The New York Shakespeare Festival did a version of Much Ado about Nothing set in the early 1900s—during Teddy Roosevelt's administration. It's a fairly good, fairly straightforward version. And it has at least the distinction of having a comprehensible Dogberry: Barnard Hughes plays the role forcefully and articulately.

Even more memorable than that is what the production does with Shakespeare's Men of the Watch. They have been transmuted into Keystone Cops.

I offer, for your educational edification, a clip that demonstrates both these claims.

Now that you've watched that, I can offer this image: 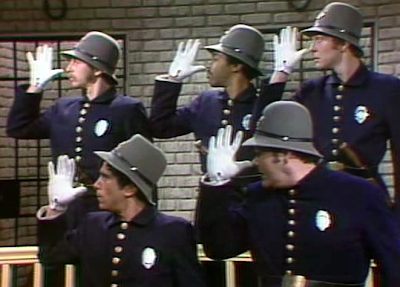 The Men of the Watch Thumb their Noses at Dogberry

The film itself is a filmed-for-television version of a stage production.  On the whole, it's light-hearted.  It's not nearly as extravagant as Branagh's or as interesting as Shakespeare Retold's version, but it's still worthwhile.
Links: The Film at IMDB. [Note: IMDB gives 1973 as the date, but the case says the program was broadcast on CBS in 1972 (though it also gives a copyright date of 1973). Most informal sources that I've consulted also give 1973 as the date.]