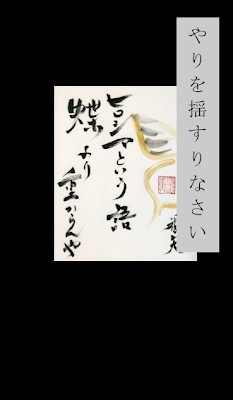 I see you trying to scan that sentence. It doesn't amount to a haiku.
Sorry. I exhausted all my poetic efforts on the actual haiku I wrote for the competition.

Anyway, here's the haiku in question.
It sums up the majesty, the beauty, the complexity of Hamlet in seventeen syllables.

A wandering ghost—
My dead father cries “Uncle!”
I must have revenge.

If I become inspired, more of these may follow. If not, just know that the Japanese characters inset into the image above are (according to Babel Fish, at least) "Shake Speare" in Japanese.
P.S. I've translated the poem into Japanese—and then back into English—with Babel Fish. Here's the result (in irregular measure):

The illusion which you wander about
as for the father where I die
the uncle
as for me who shout
you must have vengeance.

I enjoyed the 'haiku effect' you put on Hamlet! ;-)