Discoveries in The Undiscovered Country 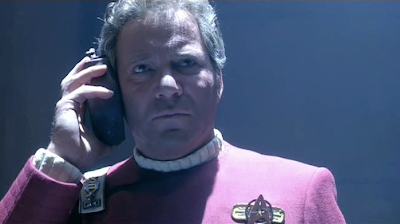 Star Trek VI: The Undiscovered Country. Dir. Nicholas Meyer. Perf. William Shatner, Leonard Nimoy, DeForest Kelley, Nichelle Nichols, James Doohan, Walter Koenig, and George Takei. 1991. DVD. Paramount, 2004.
After this post, we'll move from The Undiscovered Country to other matters, but an examination of the use of Shakespeare in that film has led my mind into tangential territory that I find interesting.

All the Shakespeare in that film is given to the villain.  The good guys just watch as their author is misused, abused, appropriated, and twisted—all without even so much as a "base, proud, shallow, beggarly, three-suited, hundred-pound, filthy, worsted-stocking knave" directed at him.

I've repeatedly said that Shylock's "Hath not a Jew" speech is almost impossible to play unsympathetically. In my research for posts on this film (especially on the Nazi use of Shakespeare in the Second World War), I discovered that a version of Merchant of Venice was broadcast on German radio—as incitement to anti-Semitism—on the day before Kristellnacht.

Shylock must have been portrayed with all the worst presumed characteristics of Jews. But I wonder. Could no one hear those lines sympathetically? In the aftermath, did no one think of those words and reconsider?

In the clip I posted in the previous entry, General Chang says the lines, and we fail to sympathize. But, of course, he hasn't been tickled, he hasn't been pricked, and he hasn't even been wronged. Therefore, his claims are ludicrous—we don't have to accept the conclusion of "Hath not a Klingon" because we don't have to accept the premise. But it was surely different in Germany in 1938.

Wasn't it?
Links: A Gateway to Star Trek Information at Wikipedia. Official Site of The Klingon Hamlet.