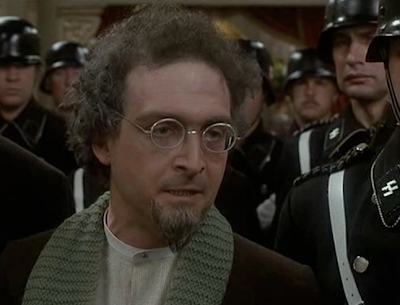 To Be or Not To Be. Dir. Alan Johnson. Perf. Mel Brooks, Tim Matheson, Charles Durning, and Christopher Lloyd. 1983. Twentieth Century Fox, 2006.
A while ago, I posted a version of Shylock's "Hath not" speech from Jack Benny's To Be or Not To Be.  In that version, the speaker's religious and ethnic background isn't absolutely plain.  We know that he's Jewish because of some remarks he makes early in the film ("What you are I wouldn't eat," he says to a ham actor:  "You're a ham; I'm Jewish; I keep kosher; what you are I wouldn't eat" is the unstated progression), but the main purport of the speech is that Poles (did I mention that the setting is Nazi-invaded Poland in the early years of World War II?) and Germans are, at heart, the same.

Mel Brooks' version of the scene makes the speaker's Judiasm much plainer and brings the issue of anti-Semitism to the forefront to a far greater degree.

Shakespeare's words, given to the villain of the piece, are used to make a sympathetic plea for Jews in an extremely anti-Semitic setting:

This is one of my favorite film scenes/speeches, full stop. Thanks for sharing it.