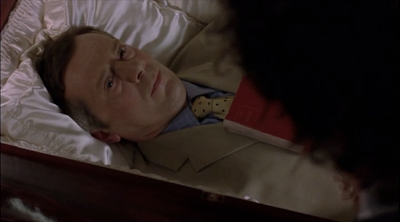 . . . trippingly on the tongue. And replace the artistic director.”

I’ve been mentioning some obscure derivitives, some of which haven’t yet been released. I thought I’d switch gears and mention a fabulous Shakespeare-related series that's out and readily-available:

The three-season Canadian television show follows the actors, directors, and staff of a Shakespeare festival as they go through three seasons.

In the first season—in the first show, even—the artistic director dies (that’s him in the coffin above) and is replaced by a new director—one who previously went insane while playing Hamlet under the previous director.

Trust me, it’s great. It’s a little heavier on the heavy language than one likes for general audience viewing, but it’s full of marvelous lines, including this one from the ghost:

“Death virtually eliminates the need for pretense. There’s no one to impress.”

That from one of the most pretensious ghosts you’ll ever meet!