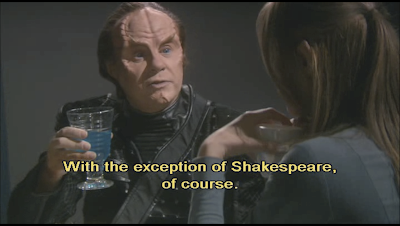 Grading papers is hard. So it's sometimes necessary to offer oneself
some motivation.

A few years ago—before the college had acquiesced to my constant and
vociferous whining, whining, whining and given me a MacBook Pro in
place of the hideous other-operating-system machine they had foisted
upon me—I discovered a show called Star Trek: Enterprise.

Those who are true Star Trek Fans will be better able to describe it.
I think I'd call it a prequel to the original series. I thought it
was all right. "Interesting stories, fast-paced and fun," I thought.
"The perfect fifteen-minute break from the intensity of grading papers."

Yes—but it's about forty-five minutes without commercials.

Oh, yes. And I was watching them at three times the speed with the
subtitles on. I felt guilty about wasting time that could have been
spent grading, and a loss of forty-five minutes would have been
unconscionable. So I'd grade five or ten papers, watch a fifteen-
minute show, get back to grading, take another break, et cetera. Soon
the forty-five essays (and four episodes) would be behind me . . .
untill the next paper came due.

Much later, once I'd been granted the Macintosh exception, I tried the
show again. And it was terrible. So slow . . . so . . .
terribly . . . slow. Macintosh didn't let you play them at three
times the speed with the subtitles on . . . unless you downloaded each
episode to the hard drive and watched them with Quicktime.

After doing that, it seemed like a pretty good show again!

But all this is more of a justification for taking breaks from grading
to watch still Star Trek-related shows. And it is. You can tell that
I feel guilty about it.

As for its relevance to this blog's topic . . . well, you'll have to
wait until tomorrow! I've used up all my tiume justifying my actions;
I don't have any left to explain them!