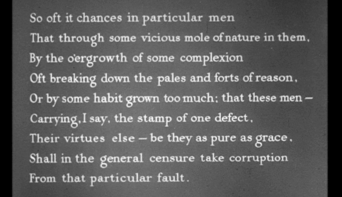 The gist of the speech is “sometimes a person is defined by one part of their identity, however diverse and complicated that identity may be.”

After that, Olivier’s narrator (is it Olivier himself?) explicitly states the “particular fault” of the Hamlet we’re about to encounter:

This is the tragedy of a man who could not make up his mind.

Those two separate speech acts (to sound like a post-structuralist literary critic for a minute) are intriguing. The tone of the first is that it’s rather a shame that a person might be so defined; the second does just that with Hamlet himself.

Our encounter with the vastidity of representations of Hamlet show us that his character, perhaps more than some others, has an enormous complexity—which makes it all the more of a shame that he should be defined by one element.

But . . . perhaps . . . perhaps it’s impossible not to present Hamlet in simplified form. After all, it’s only after studying this wide ranges of Hamlets that we get a greater and greater sense of that complexity.

I think I’ll go watch a five-minute silent version of Hamlet. Simplicity has its appeal.

So, oft it chances in particular men
That for some vicious mole of nature in them,
As, in their birth, wherein they are not guilty,
(Since nature cannot choose his origin),
By the o'ergrowth of some complexion,
Oft breaking down the pales and forts of reason,
Or by some habit that too much o'er-leavens
The form of plausive manners—that these men,
Carrying, I say, the stamp of one defect,
Being nature's livery or fortune's star,—
Their virtues else—be they as pure as grace,
As infinite as man may undergo—
Shall in the general censure take corruption
From that particular fault. (I.iv.23-36)