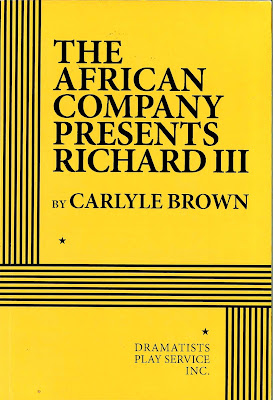 Brown, Carlyle. The African Company Presents Richard III. Dramatists Play Service, 1994.I cannot now recall where I heard of this play, but I know that I immediately wanted to track it down and find out what it's all about.
It's all about two productions of Richard III in 1821 in New York City.  One is by a black company, but it's attended by both black and white audiences (though the audiences are segregated). Interestingly (and crucially to the development of the plot), the white audience has to stand in the back in a roped-off section.
That gives the second production—a white production bringing a famous actor over from England (Junius Brutus Booth, as it happens) to play their Richard—to manipulate the law to get the black production shut down. Fire codes, you know, and excessive noisemaking, et cetera.
The play itself was first performed here in Minneapolis in 1988.  It "premiered at Penumbra Theatre, Minnesota’s only Black Professional Theatre Company, in February 1988, during the same time that The Guthrie Theater in Minneapolis was presenting Shakespeare’s Richard III" (from Red Bull Theater).
I'd like to give you two samples from this brief play.  The first is Act One, scene four, a monologue by Papa Shakespeare: 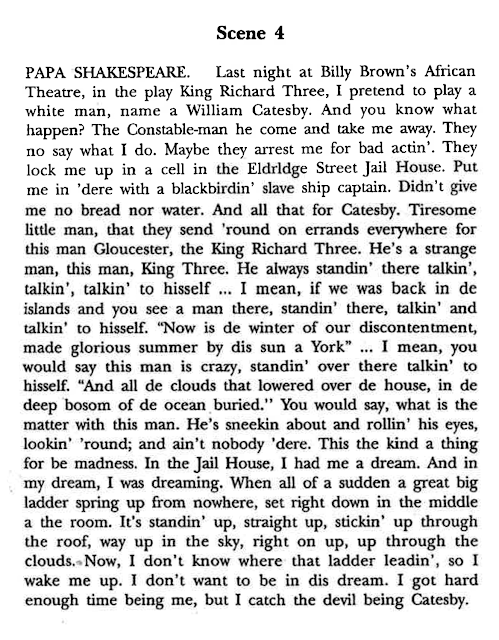 The other is Act Two, scene five, in which the performance of Richard III by the black company—now moved to a playing area directly across the street from the white production—is shut down by the authorities (pages 50-52, here made into a two-page spread): 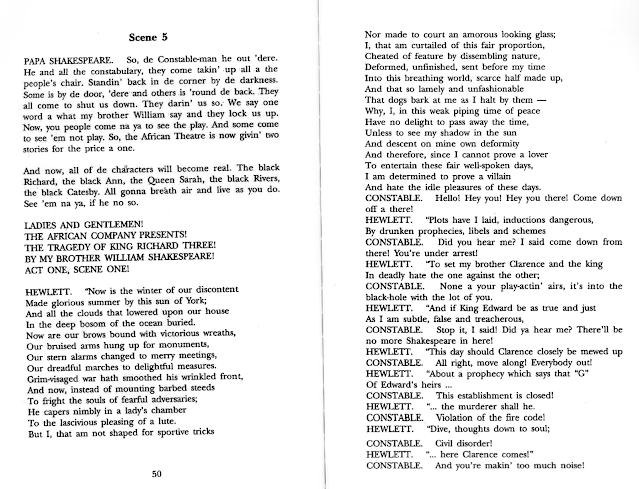 There you have it. It's very interesting, and I'd like to see it in performance.
Click below to purchase the film from amazon.com
(and to support Bardfilm as you do so).

Great River Shakespeare Company is doing it this summer in Winona. Come on down!