The St. Crispin's Day Speech in The Wars of the Roses 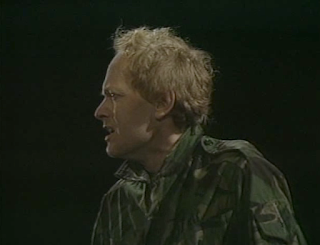 Henry V. Dir. Michael Bogdanov. Perf. Ben Bazell, Roger Booth, and Philip Bowen. Wars of the Roses. 1991. DVD. Films for the Humanities & Sciences, 2005.
While we were in St. Crispin's Day vein, the students and I tried out the version provided by the War of the Roses series—I suppose you could call it the Hollow Crown of the early 1990s.

This version of the speech provides yet another take on Shakespeare's lines. I think they're still rousing—one of my contentions is that it's very difficult to deliver the lines in a way that lacks all inspiration (which didn't keep Babakitis from managing it in his 2007 version—for which, q.v.).

Rousing though it is, it finds its appeal in a different place. In this version, Westmoreland, who's "O that we now had here / But one ten thousand of those men in England / That do no work to-day! (IV.iii.16-18) initiates Henry's response, is shamed by Henry's overhearing the remark, and the rest of the speech is driven to shame him (and, perhaps, the others on stage) into willingness to fight:


I've never seen this motivation drive the speech . . . which isn't to say that the speech doesn't make me want to grab my longbow (or, in this version, my AK-47) and rush into the fray.
Links: The Series at IMDB.


Click to purchase
(or to have your library purchase)
the films from Films for the Humanities and Sciences.
Copyright 2008-2039 by kj at 8:00 AM

Nice blog is yours