The St. Crispin's Day Speech in the Globe Production of Henry V 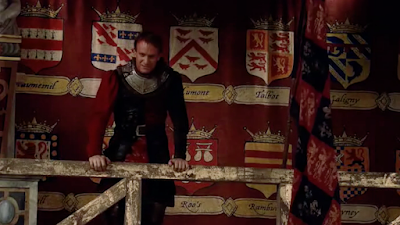 Henry V: Globe on Screen. Dir. Dominic Dromgoole. Perf. Jamie Parker, Brid Brennan, and Graham Butler. 2012. DVD. Kultur, 2013.
To conclude our brief series on St. Crispin's Day Speeches (should that be "St. Crispins' Day" or even "St. Crispins' Days" by this point?), let us head to the Globe Theatre.

No, not that one. That one burned down in 1613, silly, and I'm no Doctor Who (for whom, q.v.). Let's head to the New Globe Theatre, which has been producing more and more DVDs of its productions, allowing the Globe Theatre to come to those who find it hard to go to the Globe theatre.

As my students instantly recognized, this production pays more attention to the language of the speech than others do. It's still telling, moving speech, but it depends on the speech to do that—not on camera angles or soundtracks.

And it has a brief moment of humor—though I'm not sure it works. When Henry offers to put money in the purses of those who don't wish to fight, one soldier pretends to consider the offer. It gets a laugh, and the soldier clearly indicates that he's not seriously considering the proposition, but it also interrupts the flow of the speech, and the actor has a bit more work to do to get the momentum back again.