“Shakespeare was a Black Woman”: Maya Angelou's Statement in Context 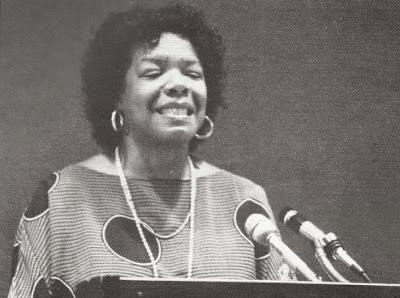 Angelou, Maya. "The Role of Art in Life." [Transcript of address given to the National Assembly of Local Arts Agencies Convention in Cedar Rapids, Iowa, 12 June 1985.] Connections Quarterly September 1985: 14+.
On multiple occasions, I've read that Maya Angelou said, “Shakespeare was a Black Woman,” but I was never able to track down the full context of that statement.

Let's hear it for Reference Librarians again! Although this was a bit of a knotty problem to unravel, a reference librarian at my institution was able to find the address in which she made that statement (or at least the largest extraction from that address I've seen).

The context it provides is very interesting. Maya Angelou voluntarily refrained from speaking from age seven to age twelve. A woman of the town took it on herself to read to Angelou:


She knew I loved poetry. I had James Weldon Johnson, County Cullen, Langston Hughes, and Paul Lawrence Dunbar at the tip of my tongue. I loved Shakespeare—I didn't understand that much, I but I loved it. I would record whole scenes and plays, and all the sonnets I could just choke down. (14)

This woman encouraged Angelou to speak by telling her that she would never truly love poetry unless she could speak it out loud. Eventually, Angelou determined to do a "rendition" at a church meeting:


. . . at twelve-and-a-half, I had my voice back, and I decided I would render a rendition. In the CME Church in Stamps, Arkansas, I decided that I would render Portia's speech from The Merchant of Venice. That | would get them. That would knock them right off their pews—I could see myself doing it: "The quality of mercy" (pause) "is not strained. It droppeth" (long pause) "As a gentle rain—" I had it choreographed; it was going to be fantastic. But then, mama asked me, "Sister, what are you planning to render?" So I told her, "A piece from Shakespeare, Mama." Mama asked, "Now sister, who is this very Shakespeare?" I had to tell her that Shakespeare was white. And Mama felt the less we said about whites, the better, and if we didn't mention them at all, maybe they'd just get up and leave. I couldn't lie to her, so I told her, "Mama, it's a piece written by William Shakespeare who is white, but he's dead. And has been dead for centuries." Now, I thought then she would forgive him that little indiosyncracy [sic]. Mama said, "Sister, you will render a piece of Mister Langston Hughes, Mister County Cullen, Mister James Weldon Johnson, or Mister Paul Lawrence Dunbar. Yes ma'am, little mistress, you will."

Well, I did. But years later, when I physically and psychologically left that country, that condition, which is Stamps, Arkansas, a condition I warrant, regrettably, that a number of people in this very room abide today, I found myself, and still find myself, whenever I like stepping back into Shakespeare. Whenever I like, I pull to me. He wrote it for me. "When in disgrace with fortune in [sic] men's eyes / I all alone beweep my outcast state / and trouble deaf heaven with my bootless cries / and look upon myself and curse my fate / wishing me like to one more rich in hope / featured like him, like him with friends possessed / desiring this man's art and that man's scope / with what I most enjoy contented least. . . ." Of course he wrote it for me; that is a condition of the black woman. Of course, he was a black woman. I understand that. Nobody else understands it, but I know that William Shakespeare was a black woman. (28)

It's fascinating to hear Angelou's account of her engagement with Shakespeare—and I dearly wish she had given the Portia speech. Angelou was able to find in Shakespeare her own voice: The voice of a black woman.

I'm including images of the entire article below so that you all can enjoy the full context of Angelou's words. Click on the images to enlarge them. 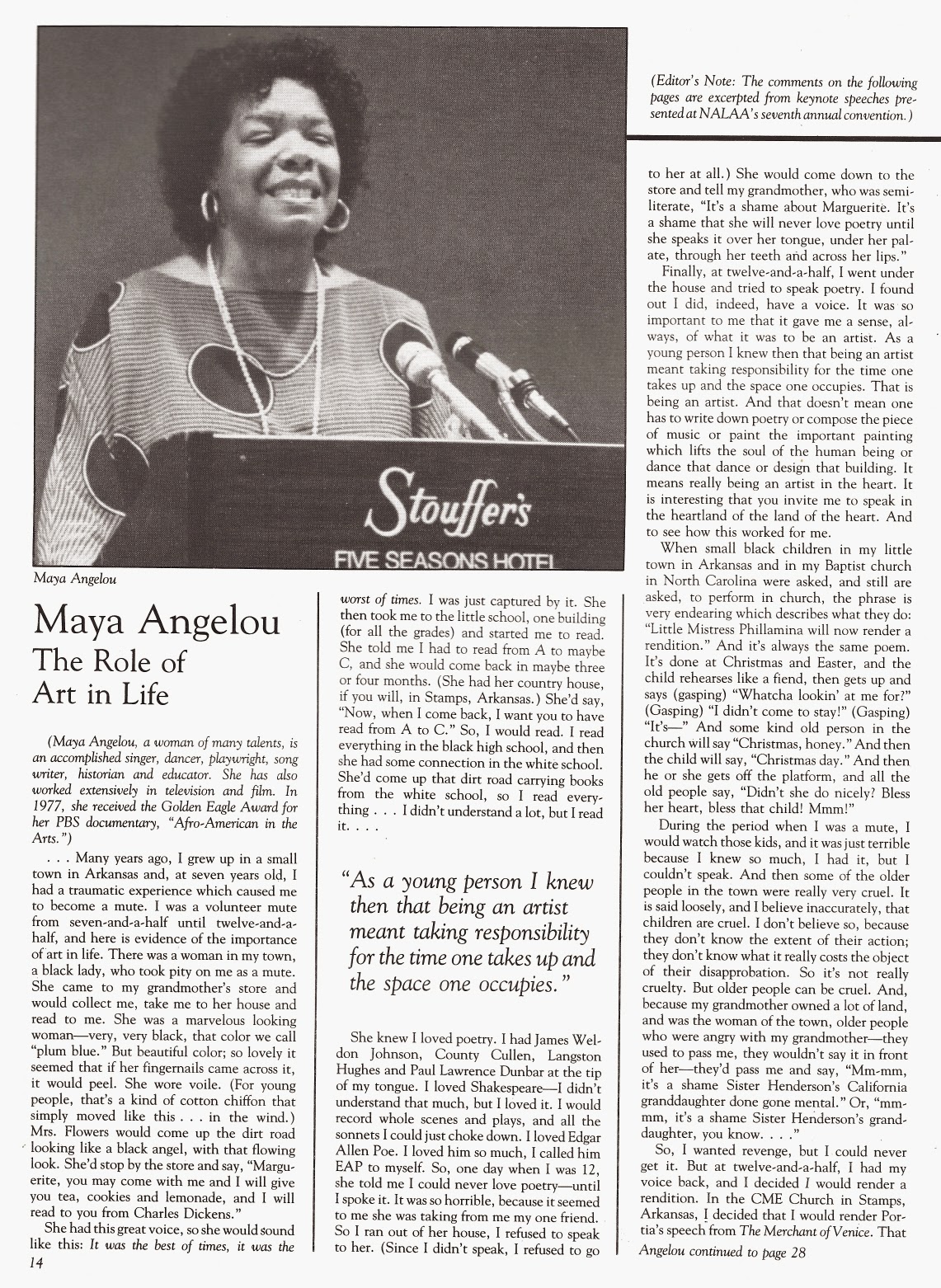 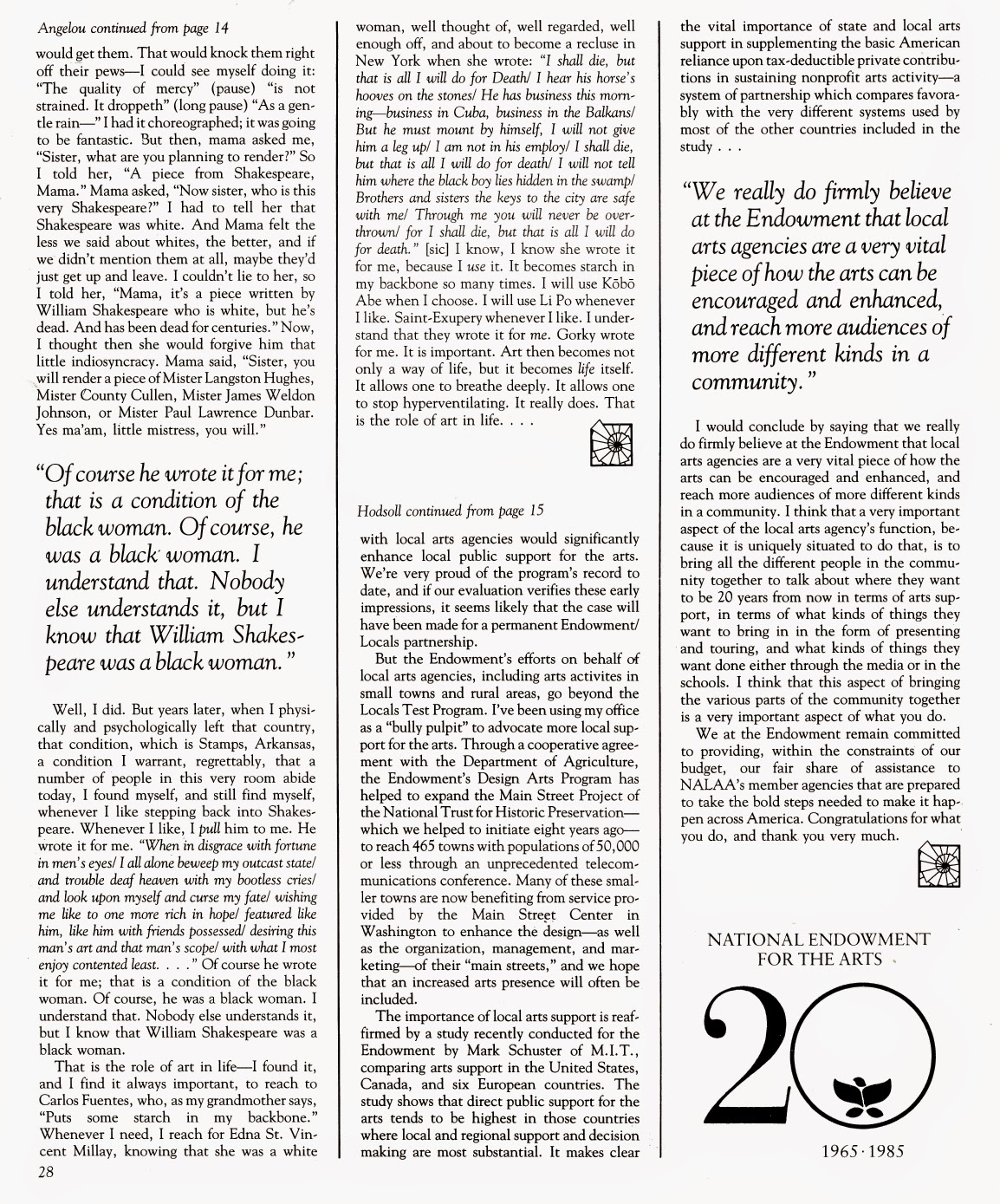 You dearly wish Angelou had given the Portia speech at the church in Stamps, Arkansas. So do I. And I dearly, dearly wish we could listen to the audio of her rendition of Sonnet 29 at the convention in Cedar Rapids, Iowa!