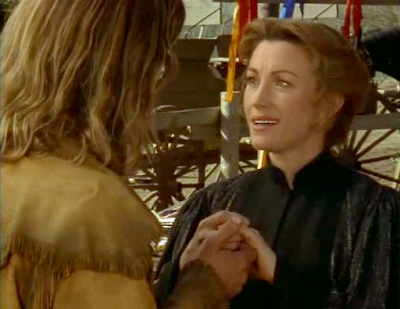 "What is Love?" By Carl Binder. Perf. Jane Seymour, Joe Lando, and Chad Allen. Dir. Daniel Attias. Dr. Quinn, Medicine Woman. Season 3, episode 19. CBS. 11 February 1995. DVD. A&E Home Video, 2009.
I never particularly liked Dr. Quinn, Medicine Woman—but I also freely admit to vast ignorance of the show. First, I thought (erroneously) that the reason Beverly Crusher left the Starship Enterprise in season two of Star Trek: The Next Generation was that Gates McFadden wanted to play the role of Dr. Quinn but the schedules couldn't, for that season, be reconciled. Second, I considered the show to be merely a version of Little House on the Prairie for older viewers interested primarily in cheesy romance. Actually, the jury is still out on that one.

But I find that I have, however slightly, digressed. In an episode in season three, the town decides to put on a production of Romeo and Juliet for Valentine's Day. Not uncoincidentally, the students of the town have been given an essay assignment: Answer the question "What is Love?" After the expected kurfuffle of lovers and friends falling out and misunderstanding each other (all of which one boy, pen in hand, poignantly observes), the director getting laryngitis, the lead getting laryngitis (if I remember correctly—the show doesn't lend itself to deep concentration), et cetera, everything starts coming together just in time for the big show. And that's where the clip below picks up. Enjoy!