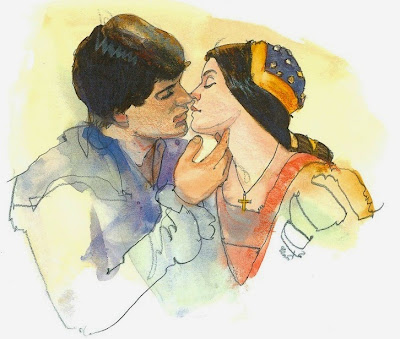 McKeown, Adam. The Young Reader's Shakespeare: Romeo and Juliet. Illus. Peter Fiore. New York: Sterling, 2003.
While trying to track down Michael Rosen and Jane Ray's version of Romeo and Juliet (for which, q.v.), I chanced upon another picture book version, and it has its compelling side as well.

Adam McKeown and Peter Fiore's version is much more detailed. It's almost a young adult novelization of the play. And their version frequently keeps close to the text—but not as close nor with as much care to indicate which words are Shakespeare's and which are the authors.

It's also a bit steamier than I'd expect from a picture book!

I'm providing an example of the same scene that I wrote about for Michael Rosen and Jane Ray's version of Romeo and Juliet: Romeo meets Juliet at the Capulet ball. Click on the image below to enlarge it. 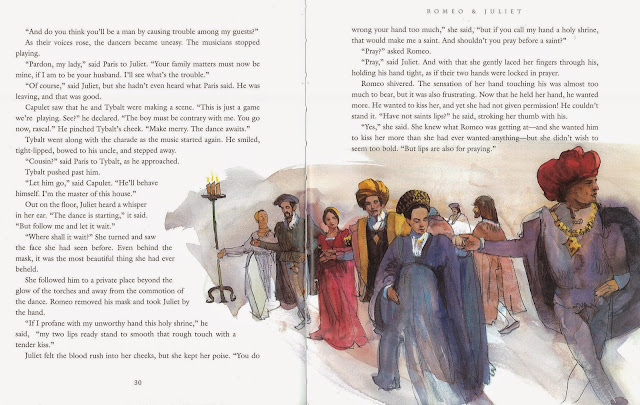 That provides a good glimpse at the prose and its use of Shakespeare's words. It also gives you a hint of the illustrations, which are a bit more realistic than those in the previous version but with quite a bit of artistry.
Click below to purchase the book from amazon.com
(and to support Bardfilm as you do so).