Jack Benny and Ronald Coleman Try their Hands at Othello 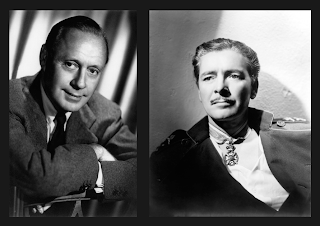 "Jack and Mary See Coleman's Movie." The Jack Benny Program. NBC. 2 February 1948. Radio.
From my earliest days, I've been a fan of Jack Benny. I remember many hours at the Headquarters Branch of the St. Louis County Library, listening to LPs and audio cassettes of old time radio programs—and always searching for more and more Jack Benny.

The dubious benefit of having all the advertising slogans of Lucky Strike Brand Cigarettes (L.S. / M.F.T.—It's Toasted!—Smoke a Lucky to Feel Your Level Best—Be Happy; Go Lucky!—et cetera) running periodically through my head is outweighed by the delight that the rest of the show occasions.

In 1948, Ronald Coleman won the Academy Award for Best Actor for his role in A Double Life, the story of an actor who fears playing Othello because he may become murderously jealous.

I told you that to tell you this. Ronald Coleman and his wife Benita frequently appeared on The Jack Benny Program as the exasperated next-door neighbors of Jack Benny. The plot of a 1948 episode of the program centers on Jack Benny and Mary Livingstone's trip to the movies to see A Double Life.

I've extracted the part of the episode that has to do with Othello and placed it in the video below.  Ronald Coleman delivers the "By heaven, I saw my handkerchief in his hand" speech (V.ii.63ff), and Jack Benny shows him how to do it better.

Links: A Double Life at IMDB.