Forthcoming: Romeo and Juliet in Harlem 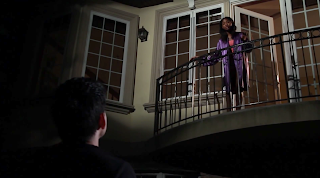 Romeo and Juliet in Harlem. Dir. Aleta Chappelle. Perf. Harry Lennix, Aunjanue Ellis, and Jasmine Carmichael. 2014. TAG Films, Moon Shadow Films, not yet released.
Ah, the power of Bardfilm. No sooner do I lament the relative dearth of Shakespeare films given an African-American cultural setting (for which, q.v.) than the wheels start turning, resulting in Romeo and Juliet in Harlem.

The film seems to be making the rounds of the festivals at present, but there is a trailer, which gives a sense of what the film is doing:

We have a Romeo of Hispanic descent (thanks for the note of correction in the comment below) and a black Juliet in an adaptation (a film that keeps Shakespeare's language, as opposed to a derivative, which keeps Shakespeare's plot but abandons the language) set in Harlem. I'm very intrigued by the idea, and I gather than the film is an ultra-low budget endeavor (despite having a big name like Harry Lennix), which may explain some of the more amateurish aspects of the trailer.

In any case, I'll be working hard to find a venue to see this film—and to see what issues it deals with—particularly in terms of black / white race relations in the United States—which, I'm sure you'll agree, is a timely conversation to have right now.

Note:  If you're anywhere near Memphis on November 1, head to the Indie Memphis Filmfest for a screening of Romeo and Juliet in Harlem!

Thank you for the kind words about our film but I wanted to make a correction. Our Romeo is of Hispanic decent, in fact ROMEO & JULIET IN HARLEM is the first Shakespeare adaptation of ROMEO & JULIET with a complete cast of color.

Thanks, Anonymous, for the correction. I've made the appropriate change and noted the correction in the text above. Sorry about that!

You seem to be affiliated with the film in some way. Can you give us any additional insight—particularly into filming Romeo and Juliet with a complete cast of color?

I've been looking forward to this also since I heard about it. I hope they get distribution soon.

i AM EXCITED about the whole cast of color thing. Most of the excellent Shakespearean performances I've seen have been done by actors of color. So, it is a no brainer to me. I feel like the history of people of color (all people of colors) is always FULL & a great match for potent language like Shakespeare's. I wanna see this movie!

does race matter tho?

From the trailer, I would say the words are the words of Shakespeare, but the language is the language of Harlem. A very effective re-do. I look forward to it.

Does race matter? In this film, it can be made to matter as a way of encoding (in visual and cultural means) the feuding families of Verona.

Should race matter? I imagine that that is a question this film is asking!

This reminds me of Langston Hughes's poem “Shakespeare in Harlem.” James Shapiro records that Hughes also put together a "short, lyrical play” titled “Shakespeare in Harlem” that riffs on the Seven Ages of Man: (“a man’s blues have seven ages"). I haven’t been able to track down the text—it’s not where it should be in Hughes's Collected Writings—but I did find a contemporaneous review. http://www.nytimes.com/books/01/04/22/specials/hughes-shake60.html

Thanks again, e meritus prauf! I've tracked down more (but not everything) about Shakespeare in Harlem, and you can read more about it here: