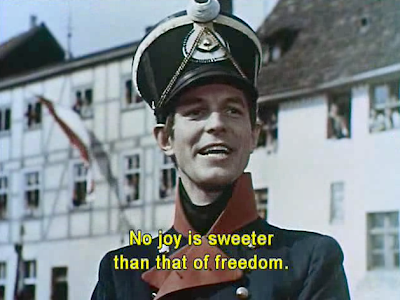 The delightful novel Friedrich Harris: Shooting the Hero (for which, q.v.) mentions the German propaganda film Kolberg in conjunction with the Laurence Olivier production of Henry V from 1944.

I watched Kolberg recently, and, although I haven't had much time to think about it, I think someone—someone who is not so far behind in the grading as I am—should consider the similarites between the scene below and Olivier's grand scene of horses galloping together at the beginning of the Battle of Agincourt (for which, q.v.).

Before the battle begins, there's a rousing speech. Then the armies gallop together in truly budget-breaking form.

I wonder—had the Nazi high command seen Olivier's Henry V? Were they interested in reclaiming Shakespeare for Germany (for which, q.v.)? Who has a bit of time—a Master's Thesis in Shakespeare and Film, for example—to investigate the possibilities?