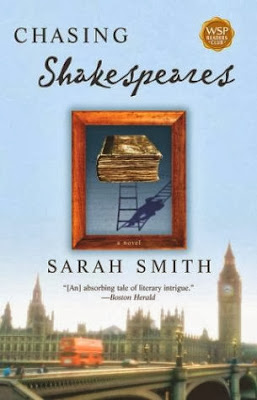 Smith, Sarah. Chasing Shakespeares. New York: Atria, 2003.
I just finished reading this very frustrating novel. The frustration arises in part because it deals with the authorship issue and in part because its plot is unsatisfactory; however, the main frustration is that this could have been a magnificent book but it falls spectacularly flat.

The three main characters are very interestingly drawn in the first fifty pages or so. Joe and Mary Cat are graduate students tasked with detailing the inventory of the imagined Kellogg Collection. The Collection is full of spurious and forged Shakespeareana. Indeed, it seems that it's nothing but forgeries. Mary Cat leaves to become a nun. Enter Posy Gould. She's meant to be the character who is endlessly attractive and alluring. The novel makes a big deal about the rumor that she has a tattoo of Queen Elizabeth I somewhere on her person (we never learn whether that's true or not).

All that is fine and quite interesting. And then Joe discovers a letter that he hopes with all his heart is another forgery. It's a letter from Shakespeare to Fulke Greville. It reads, in part (our graduate student has a fair amount of difficulty reading secretary hand, but he can make out this bit quite clearly), "Those that are given out as children of my brain are begot of his wit, I but honored with their fostering" (12; 35-36).

And that's where Posy stops talking like an interesting creation of the author. Instead, she starts to sound eerily like Charlton Ogburn, noted Oxfordian and author of The Mysterious William Shakespeare: The Man and the Myth.

Much of the rest of the book reads like very dull Oxfordian propaganda. Joe doesn't know what to think, but he explores the question seriously, including listening to all the old redating-the-play arguments necessary to keep Oxford actively composing after his death (and subsequent decomposing) in 1604.

I won't give any spoilers as to whether the letter is proved authentic, proved to be a forgery, or left in limbo between the two, but I will say that I was disappointed at the way the plot runs from the middle of the book to its end. The characters are forced into plot elements that strike me as false.

Yet the book could have been great. I'll need to read other works by Sarah Smith; she seems capable of good writing, and a novel without an agenda might demonstrate that better than this does.
Links: The Author's Web Site.

Oxfordian propaganda? Is that what you call scholarship you disagree with? (Quite convenient!) At least we can prove that Oxford was capable of writing a letter and even signing his name legibly. Be fair. That aside, I like your blog quite a bit. Thanks.