A Few Thoughts on Rosencrantz & Guildenstern are Undead 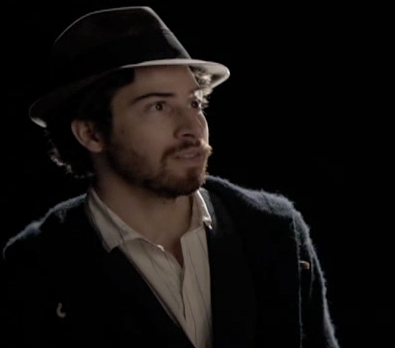 Rosencrantz & Guildenstern are Undead. Dir. Jordan Galland. Perf. Jake Hoffman and Devon Aoki. 2009. DVD. C Plus Pictures / Indican, 2010.
My hopes were high for this film. When I first learned about it—back in 2008, no less (for which, q.v.)—I was skeptical, but, as the release date was pushed back and pushed back, I became more and more entranced.

The film is bizarre and certainly worth seeing, but I wish its engagement with the text of Hamlet and Tom Stoppard's play was deeper. Still, there are some wonderful things about it.

The story it tells is one of an out-of-work director who is hired to direct a strange derivative version of Hamlet—one with vampires and other oddities. Some of the cast members are also vampires, including something of an evil-twin version of Horatio. Oh, and they're all searching for the Holy Grail. One of the best parts involves the summoning, during opening night, of the actual Hamlet on whom all the stories (Shakespeare's included) have been based—and he's a complete, unloveable ham. The characters playing Rosencrantz and Guildenstern are also wonderfully realized, as you can see in the clip below (which also includes a few other bits and pieces to give you a feel for the entire film):


Clearly, you should all see this film—even if it doesn't provide much fodder for a Shakespeare and Film class or a scholarly essay, it will entertain.
Links: The Film at IMDB.