A Return to Shakespeare in MST3K 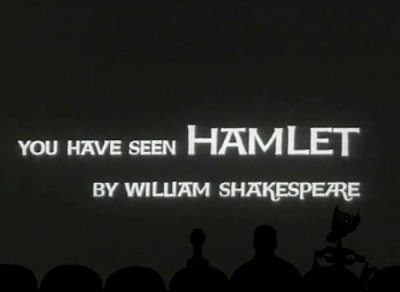 “Hamlet.” By Joel Hodgson and Paul Chaplin. Perf. Kevin Murphy, Michael J. Nelson, Mary Jo Pehl, Bill Corbett, and Patrick Brantseg. Dir. Kevin Murphy. Mystery Science Theater 3000. Season 10, episode 9. Sci-Fi Channel. 27 June 1999. DVD. Rhino Theatrical, 2003.
During the course of my Literature of Humor class, I had cause to mention Mystery Science Theater 3000 and its Hamlet episode. I wasn't terribly impressed (for which, q.v.), but a student urged me to try it again. "It's brilliant," she insisted.

I still won't go that far, but I remember two parts that really are quite brilliant. One comes from the film itself—the closing title card (pictured above), which seems to insist—somewhat desperately—that the film we just saw really was Hamlet. Really!

The second is a one-word comment made by one of the film's viewers to accompany a gesture Hamlet makes. It's actually the funniest moment in the episode, and I'm sorry I didn't include it in my earlier "brilliant gems" clip:

That, at least, is brilliant.
Links: The Film at IMDB.