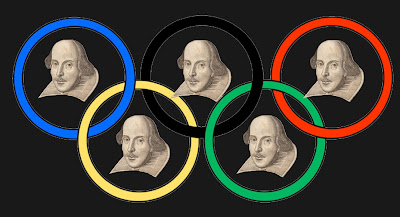 And if any athletes need inspiration to compete at their highest level, their coaches can just break into the most inspiring speech Shakespeare ever wrote: "Small, small happy, we found to the brothers!" (Henry V, IV.iii.60).
Links: The BBC's article. The 2012 season at Shakespeare's Globe Theatre. The interview with Dominic Dromgoole. Lost in Translation.
Copyright 2008-2039 by kj at 9:14 AM

The Shona TGV has already toured the country, as has that company's Hamlet.

Thank you so much, Duncan. That is fantastic! I'll incorporate that quite soon.