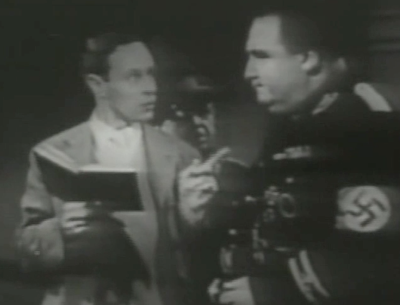 The professor in this film (played by Leslie Howard) is an Oxfordian. In one of the scenes extracted below, he picks up a skull at an excavation site and delivers this speech:

An ancient Teuton. Alas, poor Yorick. Get thee to my lady's chamber, my dear general. Tell her though she paint an inch thick, to this favor must she come. Make her laugh at that. The Earl of Oxford wrote that, you know.

Update: Alert reader and, for this post at least, copious commenter e. meritus prauf tracked down part of the film on YouTube and sent in on to me. I've extracted the portion that is relevant to the "Shakespeare was German" theme. The Professor and the General speak first of "Jabberwocky" before moving on to a bit of Shakespeare:


The dialogue is remarkably funny—but it also provides telling insight into the anti-Stratfordian position. First, here's the exchange:

General: Tell me—I am curious. Your English humorist, Lewis Carroll. Why does he write such idiocy? Listen:

[With intensified German accent—particularly on "vaa-bay"]: "’Twas brillig, and the slithy toves / Did gyre and gimble in the wabe." It does not make sense!

Professor: But it does! [With intensified English accent]: "’Twas brillig, and the slithy toves / Did gyre and gimble in the wabe. / All mimsy were the borogoves / And the mome raths outgrabe." Well, it makes perfect sense.

General: But what does it mean?

Professor: It means whatever you want it to mean. You can either use it lyrically or, as I'm afraid I do sometimes, in place of swear words.

Professor: As a matter of fact, you know, ever since I've been in Germany, I've felt exactly like Alice in Wonderland.

General: Oh, but Germany is a wonderland.

General: But we have one problem: "To be or not to be," as our great German poet said.

General: But you don’t know?

Professor: Why, I know it’s Shakespeare. I thought Shakespeare was English.

General: No, no, no. Shakespeare is a German. Professor Schuessbacher has proved it once and for all.

Professor: Oh, dear, how very upsetting. Still, you must admit that the English translations are most remarkable.

General: What is that?

Professor: One of the most famous lines in German literature.

Twice the dialogue slyly digs at the anti-Stratfordian argument. The first is when the words of "Jabberwocky" are purported to mean whatever the reader wants. Making it mean whatever you want it to mean may be fine for nonesense verse (though even that may be debatable), but it's not fine for the works of Shakesperare or for the evidence about his authorship.

The second dig is when we learn that "Professor Schuessbacher has proved it once and for all." The anti-Stratfordians—as in the previous clip—often claim that their arguments prove "conclusively that Shakespeare wasn't really Shakespeare." But the claims are never conclusive—they can't be. For the anti-Stratfordians, they can only be speculative at best and intentionally misleading at worst.

Thanks, e. meritus prauf, for calling Bardfilm's attention to the clip's availability and to the most interesting examination of the life and work of Leslie Howard you provide in the comments below.
Links: The Film at IMDB.


Click below to purchase the film (now available on Blu-ray) from amazon.com
(and to support Bardfilm as you do so).

Great to see 'enry 'iggins in this bit of derring do.

I think finding out Shakespeare's ethnicity might actually be easier than figuring out Horatio's. Mostly because he was real.

I asked e. meritus prauf for a bit of clarification, and here's the response I received. Thanks so much for this interesting information!

When I saw that clip, I knew I had seen that professor somewhere. He reminded me vaguely of Rex Harrison, but of course Leslie Howard played the original Henry Higgins opposite Wendy Hiller as 'liza Doolittle in Pymalion (1938). What I didn't know was that he returned to England after playing Ashley Wilkes in Gone with the Wind specifically to help with the war effort. Pimpernell Smith (1941) is set in 1939, a bit earlier than The King's Speech, and is credited with inspiring some Jewish rescue activity. I, too, would like to see the whole thing; it's not in our library system, but is available on Amazon. Howard was himself Jewish and an English patriot; he was shot down by the Germans over the Bay of Biscay June 1, 1943, who apparently mistook his plane for one carrying Churchill. Good timing for that clip!

I should perhaps add that Pimpernel Smith was specifically the inspiration for Raoul Wallenberg's rescue of thousands of Hungarian Jews toward the end of the war. He had attended a private showing of the film in Sweden (it had been banned in public) and commented at the time on how he would like someday to do something like that. The opportunity came in 1944 when he became the Swedish ambassador in Budapest. For his extensive rescue operation, the State of Israel includes him in the roster of the Righteous among the Nations.

Another snatch of dialogue between General von Graum and Professor Horatio Smith on the ethnicity of Shakespeare:

GEN: But we have one problem. "To be or not to Be?" as our great German poet said.
PROF: German? But that’s Shakespeare.
GEN: But you don’t know?
PROF: Why, I know it’s Shakespeare. I thought Shakespeare was English.
GEN: No, no, no. Shakespeare is a German. Professor Schuessbacher has proved it once and for all.
PROF: Yes, how very upsetting. Still, you must admit that the English translations are most remarkable.
GEN: Good night.
PROF: Good night. Good night. "Parting is such sweet sorrow."
GEN: What is that?
PROF: That's one of the most famous lines in German literature.

Now I think that's hilarious, and no doubt so did the British in 1941. But the Germans were not amused. They were very much aware of the propaganda value of Leslie Howard's filmmaking and may have plotted against him--he was also suspected of being a spy and by some accounts his plane was shot down on purpose . Like King George VI, he was fulfilling his historic role. Kudos to Leslie Howard Steiner (the family changed it to Stainer around the time of WWI and Howard dropped it altogether when he went on the stage). Barfilm has opened a window on another fascinating Shakespeare connection. Thanks!