When are you heading to the Great River Shakespeare Festival? 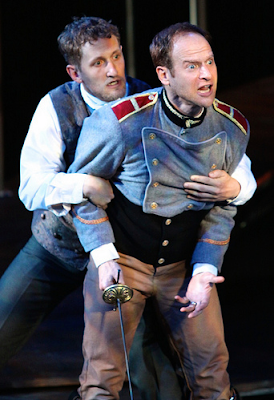 Actually, I could be more thrilled, but that would involve spending a month or two at the festival, and that just can't happen this year. I suppose it's fair to say that I'm as thrilled as it's feasible to be! After all, who wouldn't be thrilled with the prospect of seeing two Shakespeare plays with these delightful people:


Before the green-eyed monster of jealousy bites you, book your tickets at the GRSF website. After all, this year's festival ends on the first of August! And, if you come this weekend, Bardfilm might be willing to autograph your computer, iPad, Blackberry, or whatever device you use to read this blog.
See you there!
Links: The Great River Shakespeare Festival.
Copyright 2008-2039 by kj at 8:42 PM