A Waste of Shame: The Sonnets as Biographical Film 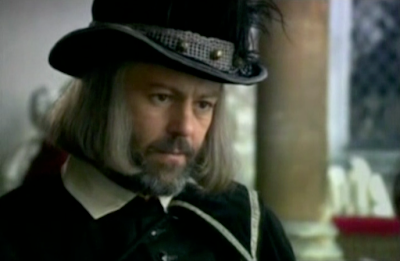 A Waste of Shame. By William Boyd. Perf. Rupert Graves, Tom Sturridge, Indira Varma, and Anna Chancellor. Dir. John McKay. Shakespeare Retold. 2005. DVD. Open University / BBC, 2005.
The Shakespeare Retold series' A Waste of Shame (only recently made readily-available to US markets) is something like a derivative film version of the sonnets. It follows the biographical approach to its extremest points, making decisions about the identities of the figures (giving both the Dark Lady and the Young Man a local habitation and a name) and forming a speculative biography based on those decisions.

Because today (20 May 2010) is the 401st anniversary of the Stationer's Register's entry for the sonnet, here's A Waste of Shame's imagined version of Shakespeare's deal with his publisher:


A few interesting points come up in the clip:

I don't tend to follow biographical readings of the sonnets very carefully. Meaning may be found there—but there may be even more meaning in the poetry itself.

N.B.: The title of the film comes from Sonnet 129. It follows forthwith:

Th' expense of spirit in a waste of shame
Is lust in action; and till action, lust
Is perjured, murderous, bloody, full of blame,
Savage, extreme, rude, cruel, not to trust,
Enjoy'd no sooner but despised straight,
Past reason hunted, and no sooner had
Past reason hated, as a swallow'd bait
On purpose laid to make the taker mad;
Mad in pursuit and in possession so;
Had, having, and in quest to have, extreme;
A bliss in proof, and proved, a very woe;
Before, a joy proposed; behind, a dream.
All this the world well knows; yet none knows well
To shun the heaven that leads men to this hell.