Bradbury, William B. Aletta. 1860. The Trinity Hymnal. Philadelphia: Great Commission Publications, 1961. 674.Shakespeare's literary genius is so great that his theatrical genius often goes overlooked. I try to stress his dramatic sensibilities in my classes, pointing out that he had to make his characters and the action in which they were involved comprehensible to his audiences, that he had to arrange each play meticulously in order to keep the actors and their costume changes in mind, and that he frequently needed to consider how to double roles effectively.

All those things have become even clearer to me in the past few weeks. For the first time, I'm directing a Shakespeare play. It's a grade-school production of A Midsummer Night's Dream, and it's offering me first-hand insight into the fascinating world of actors and sets and costumes and music and script editing.

I told you that to give you this.

The younger children will be singing the lullaby in Act II, scene ii, and I needed to find a melody that would (a) fit the meter of the lyrics, (b) be relatively easy to learn and sing, and (c) sound like a lullaby. I managed to find exactly that in an old hymn tune. It's usually used with the lyrics "Holy Bible, Book Divine," and I hope no one will consider it a sacrilege to sing about spotted snakes instead! 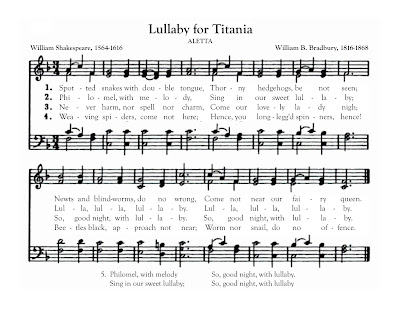 "Lullaby for Titania."
Click the image above to see a larger version.

The video below combines the music and the lyrics of the first verse to get you started!
Update: Alternately, a reader named Christopher Sheldon has recorded the first verse (with harmony, no less) for our mutual edification! Thanks, Christopher!
Later: How to sing any Shakespeare Sonnet to "Be Still, my Soul" or "I Greet Thee, who my Sure Redeemer Art"!
Copyright 2008-2039 by kj at 10:54 AM

I'll give it a shot! Been decades since I've read music, though - got a sample of the audio I'm supposed to follow?

That's pretty awesome! I too find it fascinating to look into Shakespeare's theatrical genius, not just his literary. I had a professor once who believed that the different spelling of words in the original texts -- since spelling wasn't regularized at the time -- suggested different pronunciations, which implied different regional accents, and Shakespeare's audience would know something about the characters based on that.

I find it marvelously sacrilegious! I think a dollop of sacrilege is just what our Bard had in mind with this play. ;)

I went ahead and sang through this.

Not for listening pleasure (trust me, I'm no soprano), but if someone is desperate to hear the tune, here's a verse:

I had to transpose it down a fifth to reach the bass and the top together.

Please forgive the barbershop glissando on "do no wrrrrong". Old habits die hard.

Thanks, Duane, for the idea--I've updated the post with video and audio to get you started!

Thanks, Christopher! I've linked to your melodious version of the lullaby!