No, Shakespeare Wasn't Someone Else 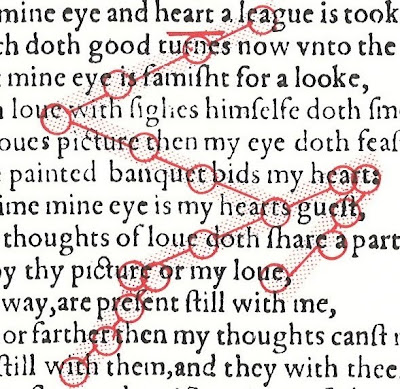 Tweedale, Ralph L. Wasn't Shakespeare Someone Else?: New Evidence in the Very Words of the Bard Himself about his True Identity. Southfield, Michigan: Verity Press, 1971. [The Shakespeare Oxford Society is listed on the title page, but Verity Press is the publishing house responsible.]
Avoiding the ad hominem attack on the anti-Stratfordian is hard for the Stratfordian to do. It's easy to make fun of those who argue that Edward de Vere, the Seventeenth Earl of Oxford, wrote the plays attributed to the man Shakespeare from Stratford-upon-Avon. Even normally meticulous scholars tend to mock the names of those who hold the view (Looney, Silliman, and Battey are prominent targets for these barbs) rather than (or in addition to) developing an argument about the view itself.

A few centuries ago, while I was in the early stages of a college education, I found the book listed above on the shelves of my college library. It was the first major work I read on the authorship question. And it was a doozy.

The argument runs something like this. If you take all the instances in which the letters V-E-R-E (or W-E-R-E or U-E-R-E or V-E-E-R or E-V-E-R or U-E-E-R or W-E-E-R) in the 1609 Quarto of the Sonnets and make straight lines out of them all, they will spell out words that indicate the true author of the sonnets. Furthermore, acrostics along the edge of the sonnets will guide the attentive reader toward the correct interpretation.

Tweedale desires to provide evidence that acrostics were not unknown during the time period. He cites a poem by Sir John Davies that spells "ELJSABETHA REGINA" (instead of Js, Is were often used—just as Us were often used instead of Vs), a poem by Anthony Muday that spells EDWARD DE VERE, and the prologue to Ben Jonson's Volpone:


V olpone, childless, rich, feigns sick, despairs,
O ffers his state to hopes of several heirs,
L ies languishing: his parasite receives
P resents of all, assures, deludes; then weaves
O ther cross plots, which ope themselves, are told.
N ew tricks for safety are sought; they thrive: when bold,
E ach tempts the other again, and all are sold.

Fair enough. But these are extremely straightforward acrostics. The ones Tweedale finds in the sonnets are much less obvious—allowing the careful reader to be much more skeptical of the idea that they are intentional. For Tweedale, "AWT" (reading up Sonnet 31) is "aught," "WOIT" (reading up Sonnet 71) is "void," and "TAAAAAAAAAAAT" (from the edge of Sonnet 66) is "Taste." That one can actually be read forward and backward, though Tweedale doesn't point that out.

One point to make against the argument is that the text must have been very meticulously seen through the printer's so that the careful preparation of the text for this secret revelation would not be lost by mislineation or typographical missettings.

First, it's not at all certain that Shakespeare (or anyone else) saw the text carefully through its publication. The Riverside Shakespeare says this about the text of the sonnets: "Quite evidently, the publication was not authorized nor seen through the press by the author, for the text is considerably worse than the texts of Venus and Adonis and Lucrece and there is no dedication by the author" (1839).

Second, Edward de Vere (whether he authored the sonnets or not) indisputably died in 1604, five years before the sonnets were published.

Tweedale isn't bothered by or silent about other counter-arguments; nor on this point is Tweedale dumb. He argues that the printer of the sonnets knew the method—and employed it in the title page and dedication (though not as well as de Vere did in the body of the sonnets). The printer even periodically introduces typographical errors when they are necessary to the argument, according to Tweedale!

But it is a bit hard to swallow the idea of the poet sitting back after finishing off Sonnet 130 ("My mistress' eyes are nothing like the sun") and saying, "I sure am glad I was able to arrange that sonnet to make the letter 'E' just where it was needed to finish the word "Shakespeare" written across the previous nine sonnets. I hope that someone will carefully publish this five years or so after my death in this sequence and with these line breaks and with just the right typographical errors so that future generations will know not only that my mistress' eyes were nothing like the sun but that William Shakespeare was the front man for an expansive conspiracy."

The last point against the argument (there are more than I'm dealing with here, but I'm running short on time) is its subjectivity. Scroll back up and take a look at the image from Sonnet 47 that heads this entry. What do you see in it? [Hint: in that instance, it's not a letter.] If the method is objective, most (if not all) of those who see the image will find the same thing in it.

What did you see? For Tweedale, "The figure in Sonnet 47 appears to be a little stick-man taking his bow, as well he might" (66).

Is it really? Why? Why would it appear here? And why would that be the only non-letter produced by the method? The claim makes me more than skeptical. It makes me leave the argument behind in its entirety.

The argument isn't convincing, but it is memorable–I never forgot this ridiculous book (and went to some difficulty to track it down again).

Below are some images from the book that give a greater sense of the argument than description alone can: 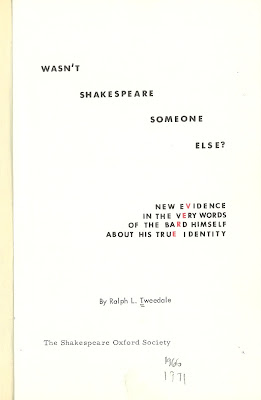 The title page. Notice how Tweedale has crafted his subtitle so that it—even it—evinces the methodology used to determine de Vere's authorship. I'm not certain, but I think that indicates that de Vere wrote the title page of this volume. 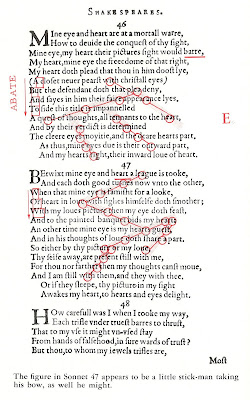 Sonnet 47, with its image of a little man taking a bow (a detailed image opens this post). 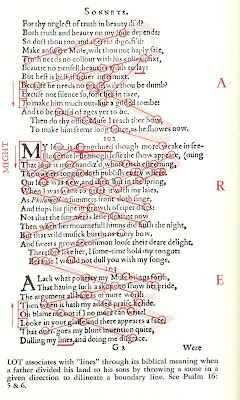 The letters "A," "R," and "E" appear (apparently) in Sonnets 101-1o3 to finish the word "SHAKESPEARE." This image is included in this post as an example of how subjective the method is. It's very difficult to see the proposed letters in this mass of connected lines.


Tweedale, Ralph L. Wasn't Shakespeare Someone Else?: New Evidence in the Very Words of the Bard Himself about his True Identity. Southfield, Michigan: Verity Press, 1971.
Copyright 2008-2039 by kj at 2:28 PM

Be a man. Stop using straw man arguments to create a guilt by association scenario. I'd expect better from an educated person, but then again, anyone who actually believes that Shaksper of Avon wrote anything beyond a shopping list, would indeed resort to ad hominem attacks. Good luck with holding onto that theory that holds next to no evidence. Highly educated people will climb onto the towering mountain of evidence that points to Oxford. The Rosenkrantz and Guildenstern connection alone is game set and match. Or the fact that Oxford had access to Beowulf (Hamlet source) and the Ovid (influenced many of his plays) while Shakspere was probably lucky to have held a book once in his life. I'll stop now, as this is probably way over your head. Cheers.

Please note that the point of the post was to deal with the argument rather than the people making the argument. I don't think I'm guilty of creating a straw man argument by pointing out the weaknesses of an actual argument by an actual person.

I see, I see. So if a student in a class isn't very smart, and gets bad grades because they don't understand the subject, that makes the entire class a failure. Nice logic.
You like to "make fun of" Anti-stratfordians by going after those with weak arguments like Tweedale, rather than trying your hand against Ogburn, Sobran or Anderson. There's a word for someone who beats up on the weakest kid on the playground. Now what is that word? I don't need to say it, you know what you are. Please don't blog about subjects that you cannot comprehend. It makes you look the fool.

HI Bardfilm, it seems that you don't know about my film. Much Ado About Something, on Marlowe's candidacy for the role of hidden hand. How is that possible? It was on PBS many times and on the BBC.

I can send you a copy it you arr open to it it was well reviewed when it came out.

I don't really follow Ryedale's point. You're clearly reviewing the book, not the Oxfordian movement, and Ryedale acknowledges that Tweedale's argument is weak.

His (her?) suggestion that you no longer speak of the subject seems more to be a case of "That Tweedale chap makes us look bad, please let me bully you into not doing that anymore!" If you want kj to review Ogburn and the others, offer to send him a copy, as Michael the filmmaker does.

I'll leave the irony of the ad hominem comments ("anyone who would believe", "this is probably way over your head"...) as an exercise to the reader.

Thanks for the offer! I do not own Much Ado About Something, though I have seen it. It's in the lengthy queue of items to comment on! Keep watching—Bardfilm will get to it.