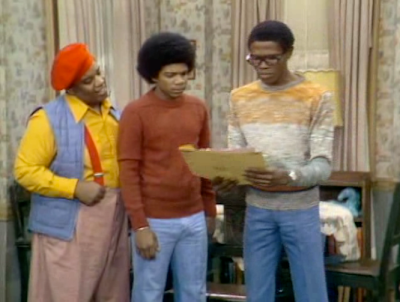 “The Incomplete Shakespeare.” By Mort Scharfman. Perf. Ernest Thomas, Haywood Nelson, Fred Berry, Danielle Spencer , and Mabel King. Dir. Dick Harwood. What’s Happening!! Season 1, episode 12. ABC. 13 January 1977. DVD. Columbia, 2004.
Despite the potential in the title of this episode of What’s Happening!!, not a Shakespeare allusion is to be found. Once again, we're run across something that fits the category of "titularly parasitical"—this time with the name of the Bard himself instead of an allusion to the title of one of his plays, which is the more usual course.

Unfortunately, this is one of the recent duds in Bardfilm's continuing efforts to find and converse about Shakespeare in film and television. The episode is about one member of the gang and his desire to write a script for a television program (that's where the idea of Shakespeare comes in—aspiring writers are often equated with—or, at least, compared to—Shakespeare); he thinks the producers of the show have stolen his idea, but it turns out that it's an idea that the producers recycle in nearly every new show they produce.

The answer, therefore, to the post's title is a tentative "Nope." Besides the title, there is no Shakespeare in What’s Happening!!

Note: It only remains for some wag to quote from Bottom's speech in Act IV of Midsummer Night's Dream. With properly-placed ellipses, it's possible to find some What’s Happening!! in Shakespeare (if not vice versa). Bottom says, "Methinks I have a great desire to a bottle of hay: good hay, sweet hay, hath no fellow" (IV.i.32-33). In other words, he quotes the key catch phrase from What’s Happening!!: "Methinks I have a great desire to . . . hay . . . hay . . . hay!" (IV.i.32-33).
Links: The Episode at IMDB.

I feel obliged to point out the connection that as a nerdy kid named Duane (who grew up to become a Shakespeare Geek) I heard no end of "Hey hey hey!" growing up.