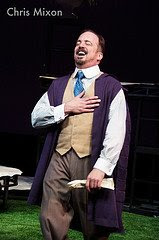 Paul Barnes’ production is extremely easy to enjoy, to laugh at, to ponder, and to be moved by—and that effect must have been astonishingly difficult to produce, however easy it may look. Yesterday afternoon’s performance was sold out (we were very fortunate to have tickets), and the crowd gave the troupe a standing ovation.

In a half an hour, we’re off to see the Great River Shakespeare Festival’s Tempest, so I’ll need to elaborate more on the festival and the production later.

But I have time for some well-deserved compliments before I need to leave.

One of the most amazing things about this production is its ability to navigate between the uproariously-funny lines and those lines that must be taken absolutely seriously.

Chris Mixon’s Berowne has a huge percentage of the play’s lines, yet he delivers them with a freshness and sincerity that is almost overwhelming. I’ll say more about the production's use of the play’s references to Cupid later, but when he delivers these lines, we get the sense that there’s genuine regret behind his flippant comment:

Go to; it is a plague
That Cupid will impose for my neglect
Of his almighty dreadful little might.

Chris Gerson’s Don Adriano de Armado—a character who is usually played for mockery alone—brings us the extraordinary humor of the lines most of the time. However, when the lines become serious (as, again, they do surrounding the workings of Cupid), he brings them across with all the depth they deserve.

I’m singling out these two only in the interests of time. This company is entirely professional, and each actor gives a stunning performance.